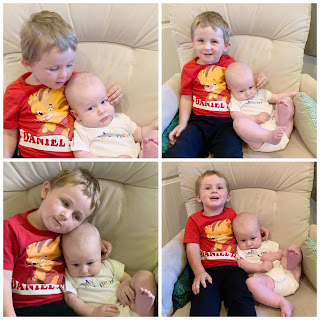 Before preschool, Miles asked me if I would take his picture with Liam. He wanted to move the chair like how I usually do for the monthly photos. She's always trying to hug and cuddle with Liam.

Email ThisBlogThis!Share to TwitterShare to FacebookShare to Pinterest
Labels: Liam, Miles, Photo of the week 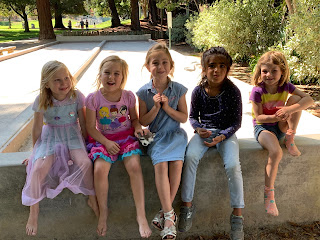 We decided to have a little get together with some people from Ella's preschool class. Another mom initiated it, but then her daughter got sick and couldn't make it. We just said this meant we'd have to do it again.  The girls all loved seeing each other. We didn't ask everyone. 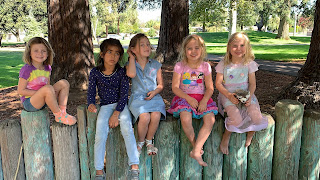 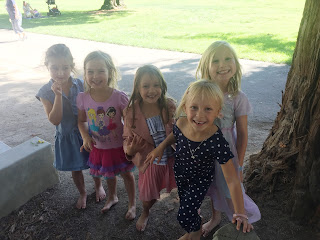 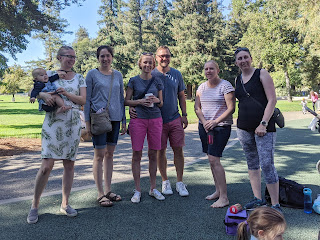 They played together for a little over 2 hours.  Ella had 6 friends there and Miles had 2 friends there. Miles did a lot of swinging and needing to be pushed so I didn't get to socialize with the other parents as much. I feel like it was a nice parent reunion too since we hadn't seen them in so long. 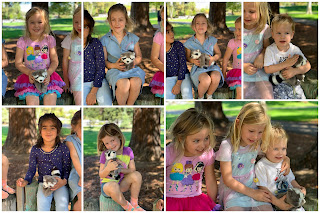 Most of my pictures involved Chester. 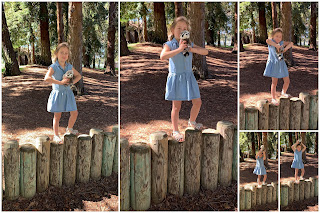 I made the collages only because Ella needs to print pictures of Chester and I wasn't about to print 50 pictures big. 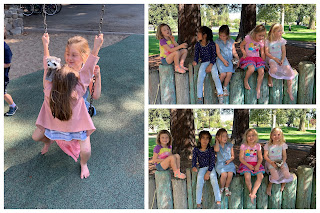 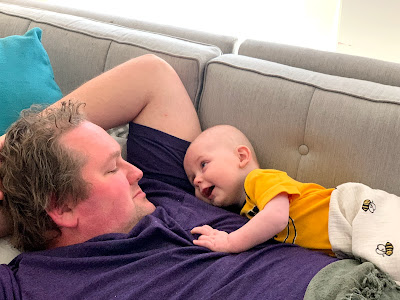 I put Liam down on Dave. He seemed to move of to the side himself. When you asked him if he did it all by himself, he was all smiles and so proud of himself. He was just too cute.  You can't tell in the above photo but I was shocked how long he was too. His foot was touching Dave's bent leg. I didn't take a picture showing it all. 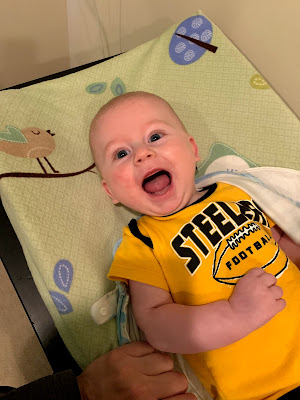 Liam woke up after having woken up only once in the night and he was so happy. Not only did he only wake once but he slept in. He really enjoyed his sleep and was so happy to just see me and get his diaper changed.

Email ThisBlogThis!Share to TwitterShare to FacebookShare to Pinterest
Labels: Liam, Photo of the week 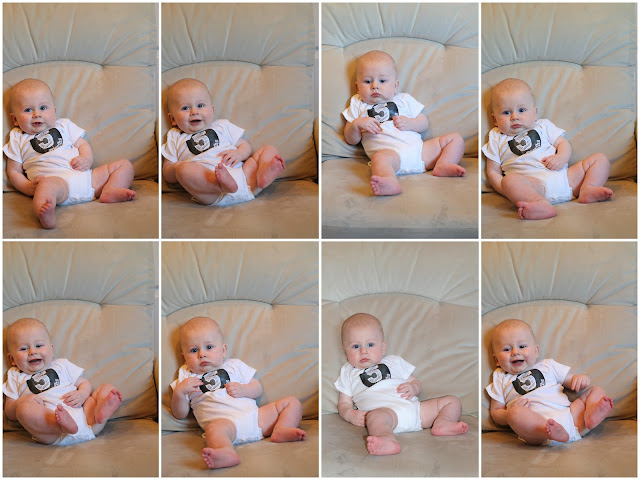 Photos were taken on the 15th because i forgot on the 14th.
Stats:

(stats using WHO, Took measurements 2 days late but the percentile is based on the 2 days late date too.) 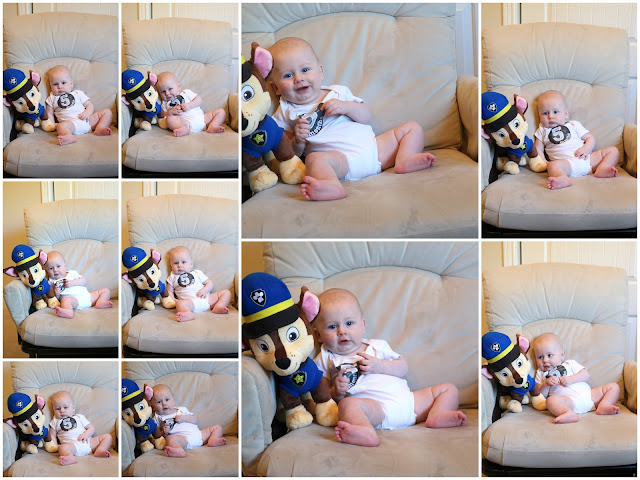 Sleep
Sleep at night has improved. He's even slept through the entire night a few times. Or maybe he hasn't slept through the night but with a broken baby monitor app sometimes I sleep through it and he goes back to sleep. Naps are rarely long. I'd say 1-4 times a day I end up having to wake him up to do a school pickup or drop off or an appointment. It sucks and I feel so bad for him. 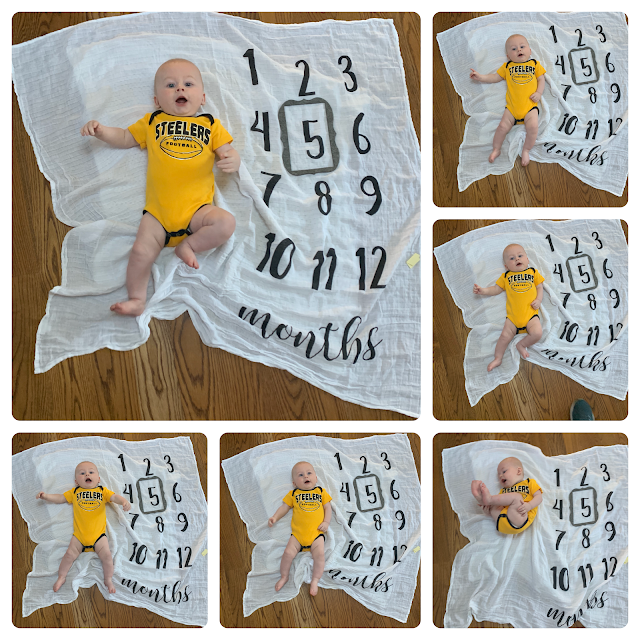 Eating
This month Liam finally became a distracted nurser. I can't talk or he stops nursing. He gets distracted so easily and won't just nurse through it all. He seems to nurse so much.

This month I started feeding Liam baby food purees. I don't feed him them daily because we get busy. He's had green beans and sweet potatoes so far.  He does not like refrigerator temperature baby food. 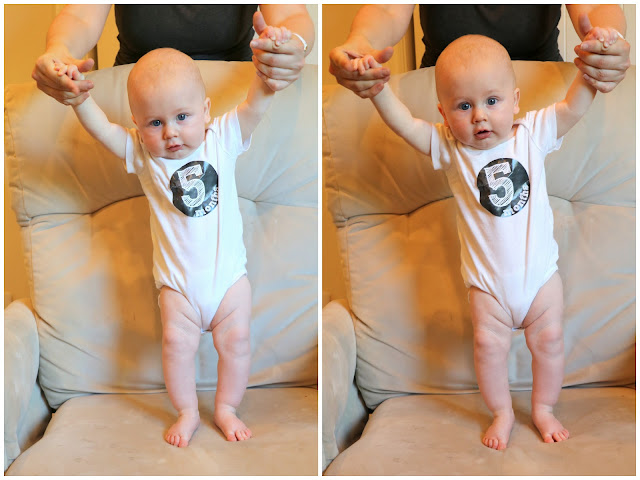 Sample Schedule:
Around 7:30 PM,  he likes to start nursing to go to sleep. Except sometimes it's way earlier but then he won't go to sleep. Sometimes he's asleep in 10 min and other times an hour. He wakes up a bunch of times or not at all. He wakes up and nurses. Then he is awake for awhile. He likes to nap at 8:30 am. That's about his only consistent thing.  I've noticed I tend to get him to sleep around 1 PM daily and then ti sucks because I have to get Ella at 1:20.  Appointments and drop offs suck.  Sometimes his naps are 22 min (of his own doing) and other times they are 1.5 hours. 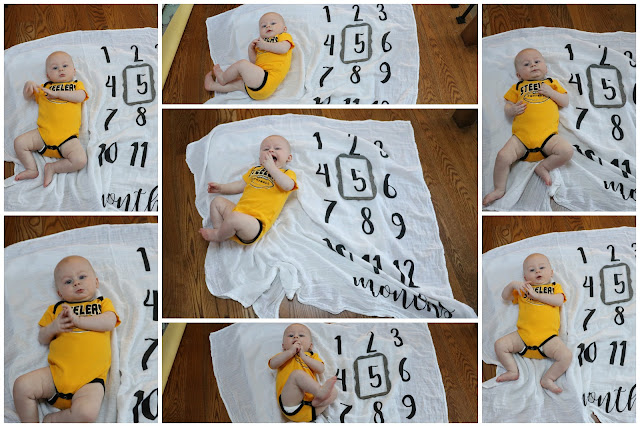 On August 15, at 9:41 AM, Liam fell asleep on floor while I was on the phone. He was on his play mat and was a bit vocal but never cried and he just fell asleep.
On August 18, Liam rode in a stroller for the first time forward facing.
On August 23, Miles’s coughing keeps waking Liam.  Liam ate his foot for the first time.
On August 24, Liam has a cold.
On August 26, Liam was up for awhile in the middle of the night. It was exhausting.
On August 28, Liam was distracted while nursing. It didn't go well. He would bite and pull as he turned his head.
On August 29, I was 90% sure I saw a tooth. On the front left.  (Later I didn't see it.)
On August 31, Liam was at Walmart in a stroller when I also had a cart. This was the first time it was 1 adult with 2 things to push around. I also had miles there too.
On September 1, Liam blew raspberries.
On September 2, the baby monitor app sucks. Dave had to wake me twice from actual baby crying. The iOS update had to ruin it. Ella had Liam and didn't pay attention well enough and he fell off the chair that was up on top of the couch. He landed on the floor.  Miles hung on the stroller and it flipped Liam over.  Luckily Liam was buckled. Liam got cold and pushed the fan away that was being pointed at him.
On September 3, Dave was holding Liam. I asked if he wanted me to hold him. He pushed me away and turned more toward Dave.  Then when I held him we asked if he wanted daddy and he leaned way over to him! Liam was on the chair and a half and pooped. It all came out the side of the diaper and got all over couch. Gross
On September 4, at gymnastics  Liam had a pee diaper.. I actually thought I was going to regret this. But he was nursing so I didn't immediately change it. Well then he pooped. It went outside the diaper, down both my legs dripping, and on my chair.
On September 8, Liam had his first baby food. Sweet potato
On September 11, Liam wore his first Size 3 diaper.
On September 13, I held up pita bread to distract Liam. He chewed on it and loved it and actually ate some of it. 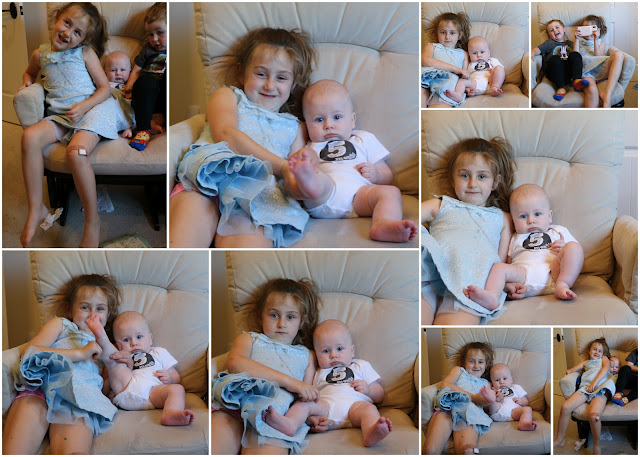 Development:
He plays with toys more. He grabs toy. He whines and complains a lot more lately when he's put down or ignored. He sits in his bumbo for 5 minutes or so.  He rolls over from back to front a lot more and then gets mad he's on his belly. This month he really became more interested in food. He grabs my hair a lot now.  His legs are getting so much stronger. He likes to sit on my leg and then go to standing position (while I hold him). He does this over and over and feels so accomplished.  He can scoot backwards to move to a new location on the floor. 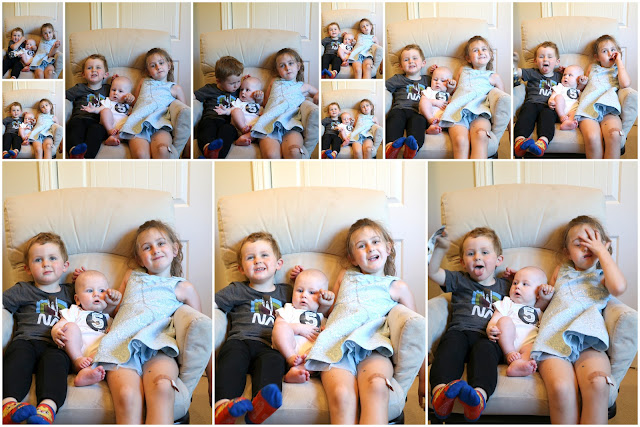 Dislikes
He doesn't like nursing when I'm talking.
He dislikes when Ella shrieks out of nowhere. 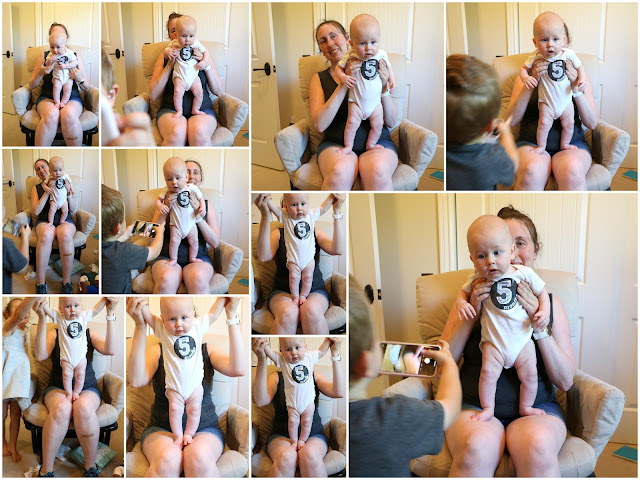 Favorite Songs
Whatever we sing to him 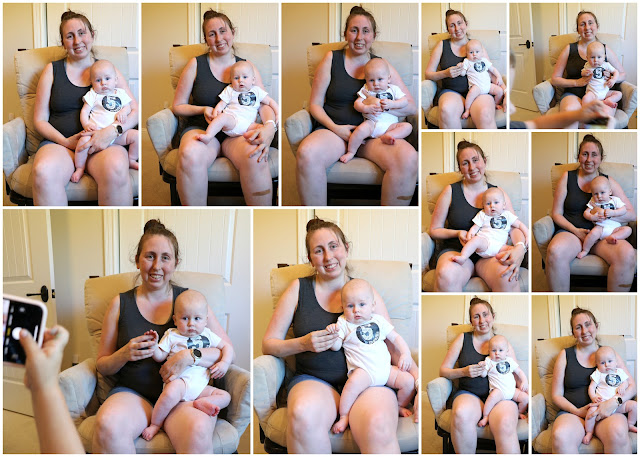 Other Tidbits
His cradle cap is almost gone. I used coconut oil to help get rid of it. Doing the trick with coconut oil and then using a brush started getting skin off but also hair would be with the skin so I stopped doing that.  He still spits up a lot. Well he goest through phases but I'd say he spits up often but maybe not a lot at each spit up. 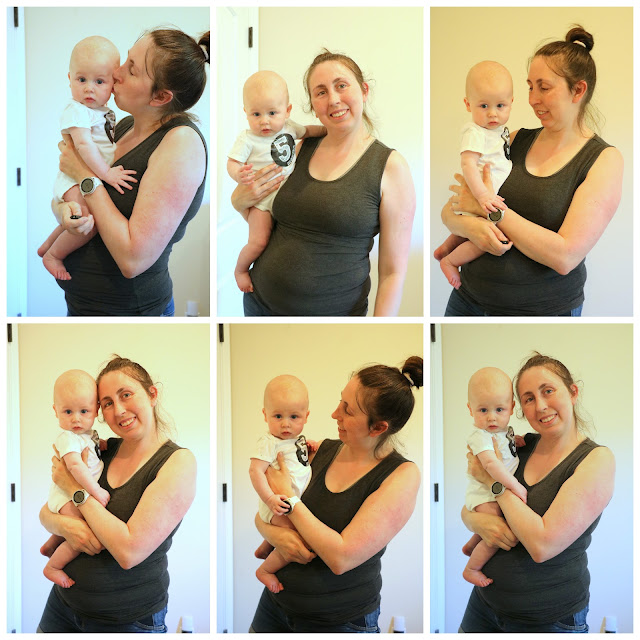 My recovery
My weight remained the same.  I still have ~38 lbs still to lose.  It's awful. My left knee bothered me at the beginning of the month but seems mostly better. I just need to make time to workout to confirm if it is better.  I'm so exhausted it's so hard to function. At night once Ella is finally asleep, I can't fall asleep right away because I have so much stuff I want to do.  I tend to fall asleep nightly on my computer not even finishing what I wanted to do.

I wrote this once and lost it and rewrote it. The first time I thought I was forgetting stuff and now I think I'm forgetting even more. I keep falling asleep making this so who knows if it's all even rewritten.
at 3:03 PM 0 comments 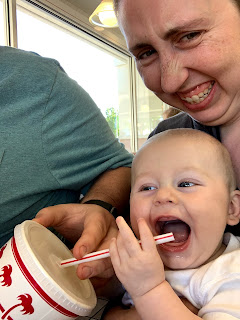 At In N Out, Liam wanted to hold and grab Dave's giant Lemonade cup. Then he was trying to bite on the lid. We showed him you drink from the straw.  This is him being so happy "drinking" from the straw. I notice my face after I see Liam's face. Maybe I should have cropped me out of it. I'm all gums.  That's how you know I was really enjoying myself.

Email ThisBlogThis!Share to TwitterShare to FacebookShare to Pinterest
Labels: Liam, Photo of the week

We always do so much that i don't even have time to document it or write about it. I never share the pictures. I took some random videos the other day. Here is a compilation.
at 2:56 PM 0 comments