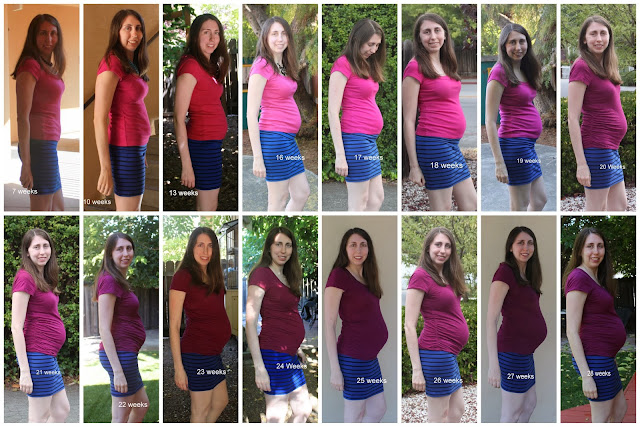 Sunday after the hackathon we went to pick up our crib but apparently our crib is in a much larger box than most cribs and won't fit in our car. We were unable to take it home. I've done some research since and we can get Buy Buy Baby to deliver for $100. We can rent a truck to pick up for $80. We have 0 friends with trucks or minivans. Dave was saying even in the entire parking garage at work he only saw one truck. Nobody has big cars around here. 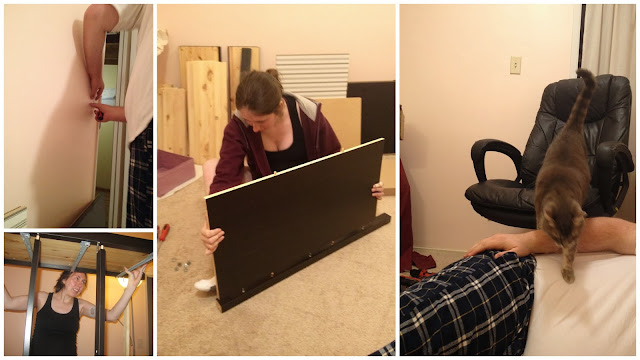 Some presents have arrived but not many. I'm not looking. Dave is doing a good job not opening them or hiding them when he does so I don't see.

My baby shower in Pittsburgh is in a week. We also finally planned the shower for CA and that will be October 27. Invites still have to go out for that one.

I spent more time this week playing with some gif software to try to find a good version. I will want to make a gif of all 40 weeks but figure I should start finding the best program now. It is quite time consuming and most look kind of silly when the quality drops so much. So far the best practice one is pretty awful for the coloring on my skin.  Maybe I should just do a video of pictures and not a gif. 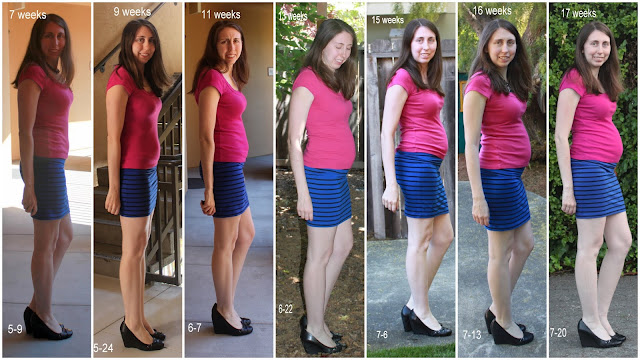 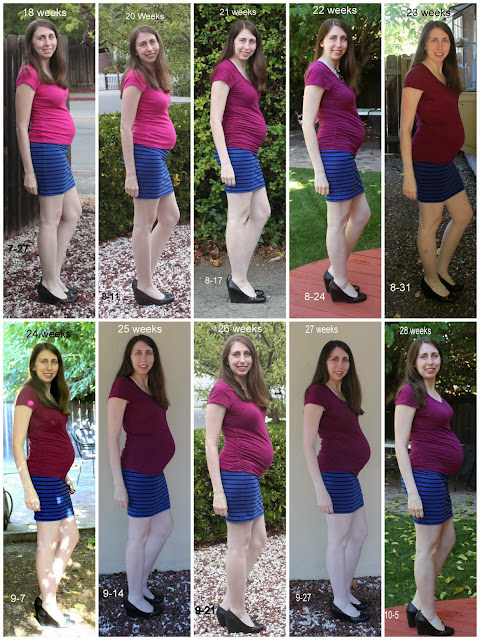 Size of baby: Iceberg Lettuce, 14.6 inches long from head to heel. My app on my phone says the baby weighs about 2.2 pounds.

Total Weight Gain/Loss:  18 lb gain overall. I gained 2.6 in the past week. (I had gained over 3 lbs last Saturday alone but lost some of that. I ate so much last weekend at Yahoo. Then I was quite swollen. I had dropped but then picked back up between yesterday and today. Perhaps it's from all the bacon I ate. Oh or perhaps the fact that I ate 3 full meals plus donuts + 2 cupcakes.)  I feel like 18 is a big number. According to my app 14-21 lb are normal so I'm finally in the normal range. At 26 weeks I was low and was low up until that point. (I didn't enter any weights the week of 27 weeks pregnant but think that would have been my first week in the normal range.)   Before I thought my gain was more normal since I lost all my muscle so now I'm probably actually ahead but it all works out.


Maternity Clothes:  Mostly. Some t-shirts and hoodies aren't maternity. I also sleep in my yoga pants that aren't maternity. I still wear some non maternity cami's because some maternity shirts are too see through and you can see that seams don't align. I'm probably really stretching out those cami's

Movement: Same as the last few weeks. I can feel movement. I can hear a heartbeat.

Sleep: I'm having more trouble sleeping than I have been. Turning over is a little harder than it used to be.  Sometimes my back or my calves hurt.  Poly likes to sleep on top of me more than she used to and sometimes it starts to feel like there are bricks on my chest so I wake up.

What I miss: Exercising and running. Lunch meat on salads.


Symptoms: My ankles were swollen for the first time. But not even just swollen in the evening, they ended up swollen all day on Sunday and Monday. They were so swollen, I think they were bigger than my calf. I kept pushing on the squishy part on my ankles too. I don't think the hackathon helped with it because I slept very little and sat at a table for a very long time without elevating my feet at all.  My back hurt for the first time. But mainly it hurt after I got a massage. I had trouble sleeping that night. I blame the chair massage because it hasn't hurt since.  My calves woke me up once hurting and I got a foot and then calf cramp 2 other times.

Looking forward to:  Can the end of December get here soon enough?  I'm too impatient.   I'm also looking forward to visiting PA in less than a week! (that's the exact same as last week except now it's in a week that I'm going to PA)

Exercise:  I only went into Dev Bootcamp once. I did walk extra then but only had a few minutes of exercise the rest of the week.
at 2:46 PM