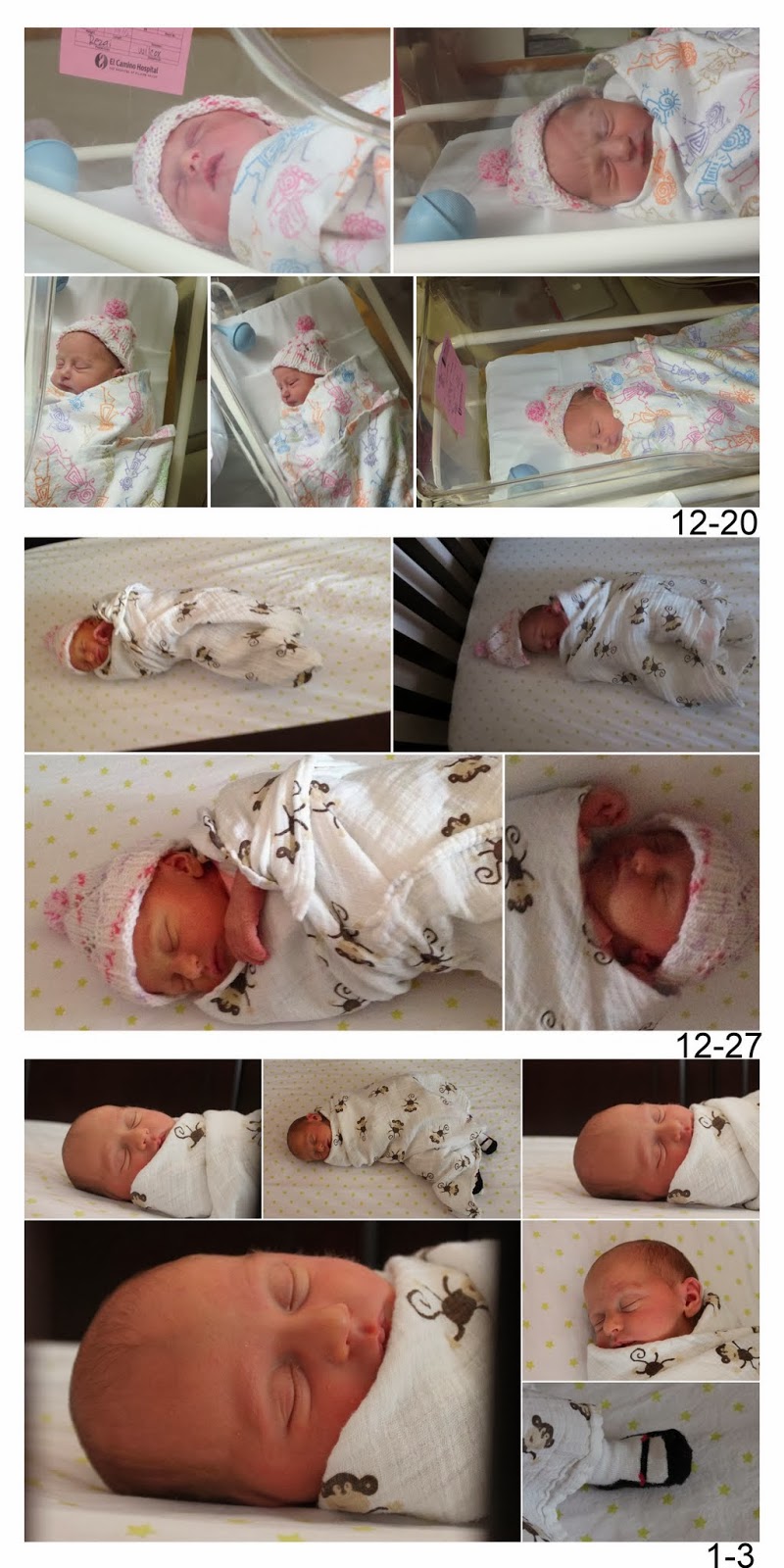 Ella weighed 7 lb 13 oz today after eating. I forgot to weigh her first.  I have some weights documented from home and the doctors. I should start measuring her too. At the doctors for her 2 week checkup a few days ago she was 7 lb 7 oz. She 20.5 inches long. (She was 6 lb 15 oz at birth and 19.5 inches long.)   She is wearing newborn clothes or Gerber 0-3 month onesies. Carters and Gerber clothing is smaller than other brands we have. The one piece outfits are a little tough to work. Her legs don't seem to fit right in them. We bought a few sets and I think a onesie should be worn under some of them but there just isn't enough room.  She's in newborn size diapers. I can't even believe they had her wearing size 1 diapers at the hospital.  We use Pampers Swaddlers. We had a big box of Huggies but they don't go up high enough in the back and she was constantly leaking out of them.

Ella is still sleeping in her crib but she isn't sleeping as much as she was last week. Also sometimes she sleeps in my arms.  There are times this week that after a feeding she stays up until the next feeding. Last week it was always back to bed.  I still set my alarm for every 3 hours to feed her but she's actually been waking up a couple minutes before my alarm goes off or right after it goes off and I hit snooze. I enjoy not forcing her to wake up to eat a lot more than last week. Last week I was so tired and so was she and yet we were there nursing in the middle of the night.  There have been a few nighttime feedings where she didn't fall asleep right away after nursing and so I held her for a bit before returning to bed. The pictures are the day she was born, a week later, and today. I've taken nicer ones of her sleeping than a week ago but I wanted pictures on the specific days to see if you can see a difference in her.   BTW those socks are so cute. I love them. They are cute and stay on her feet so it's a win. Dave was doing laundry and as soon as they were dried, I put them on her feet. I wonder if Target has other cute socks like this. 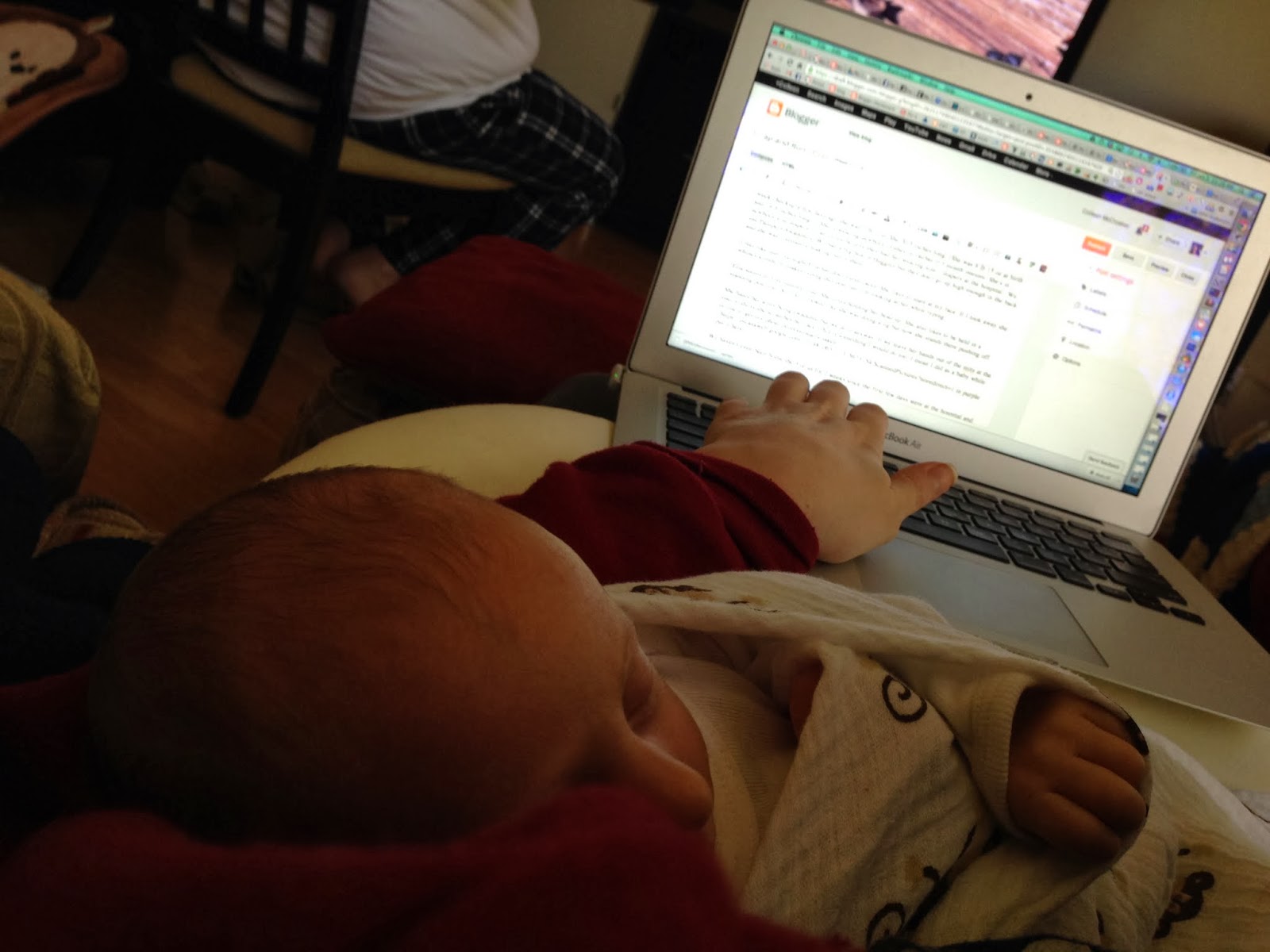 I feel like just overnight Ella has discovered faces. She likes to stare at my face. If I look away she whines a little. It makes typing this post fun. I'm looking at her while typing.  Later she fell asleep and I got more typed. 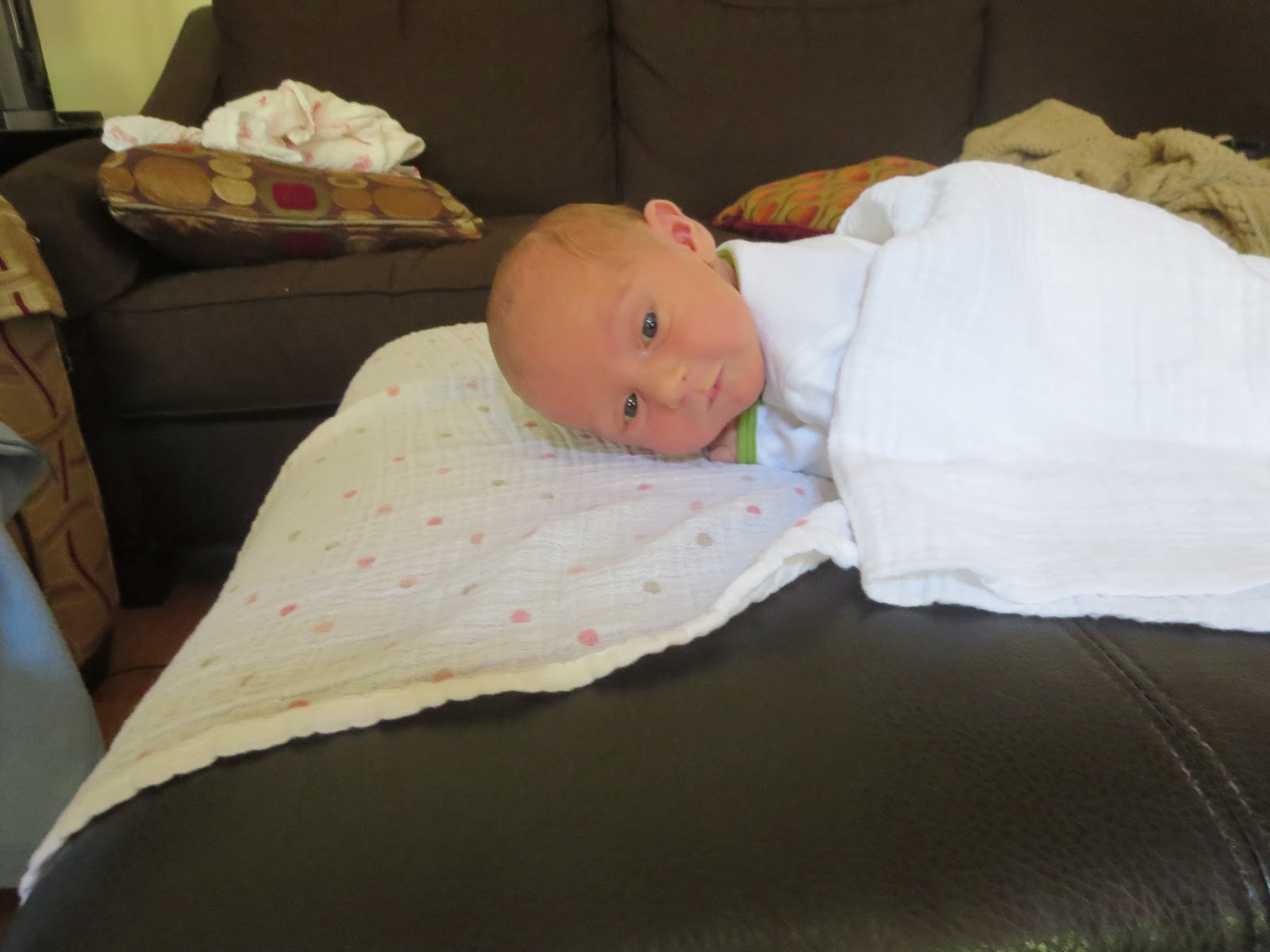 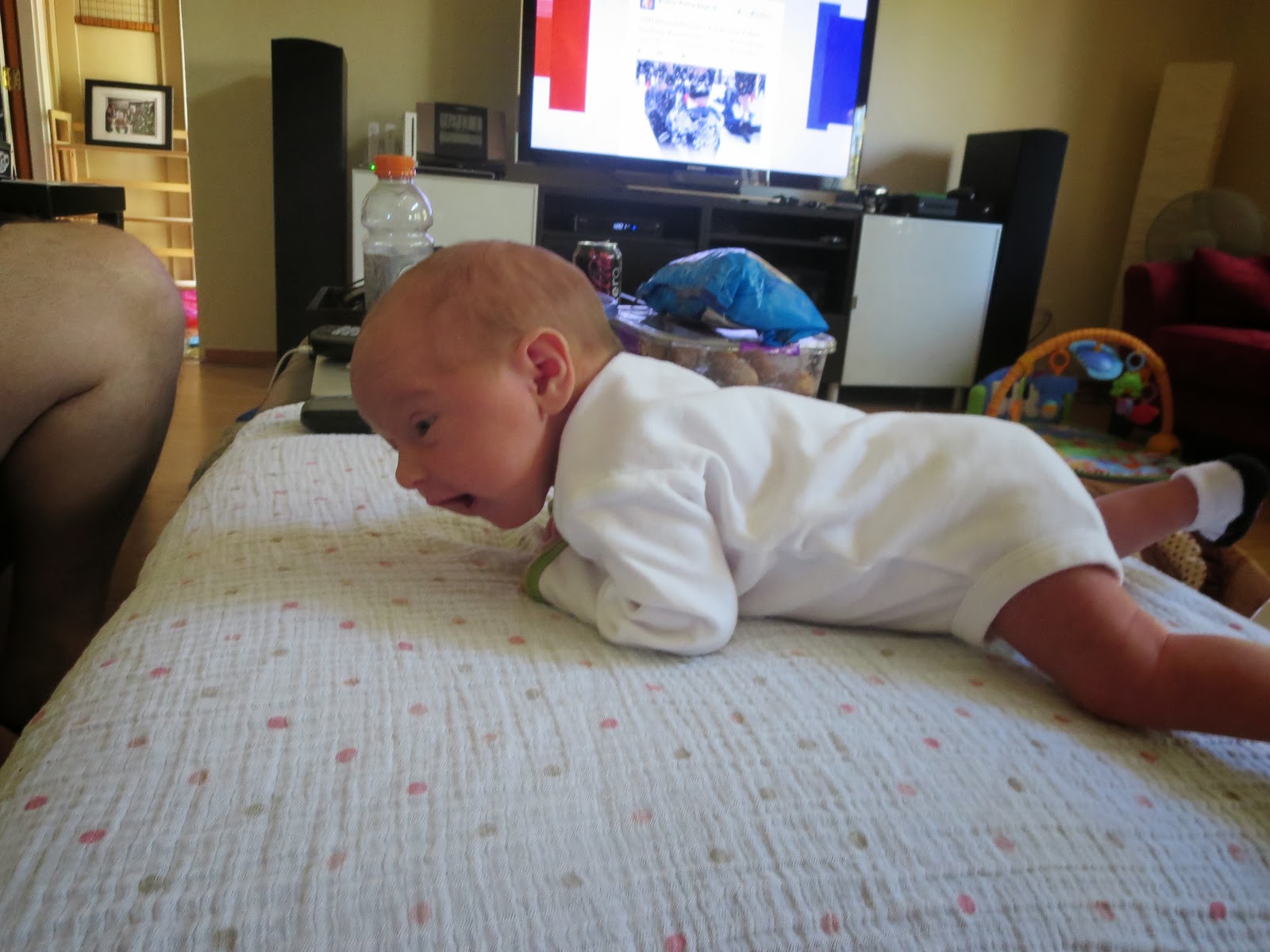 Ella seems to love tummy time. She loves holding her head up. She also likes to be held in a standing position. At first it looked like she was doing a jig but now she stands there pushing off.  While doing tummy time she moves her head and lifts it up and gets tired and rests but then she goes back at it again. I got some video of her too.

I filed her nails for the first time this week. I was too afraid to use the clippers. 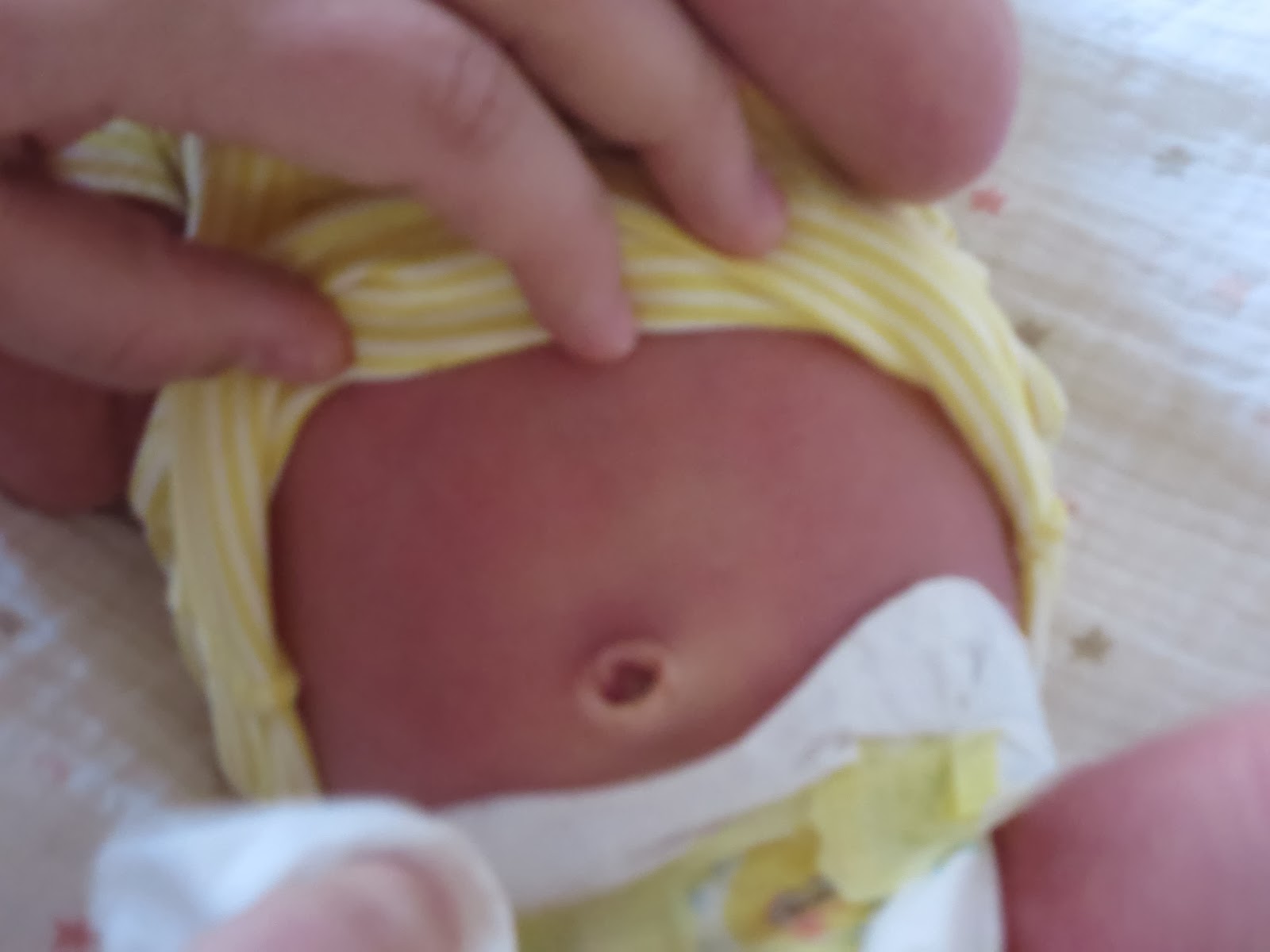 Her umbilical cord stump fell off. 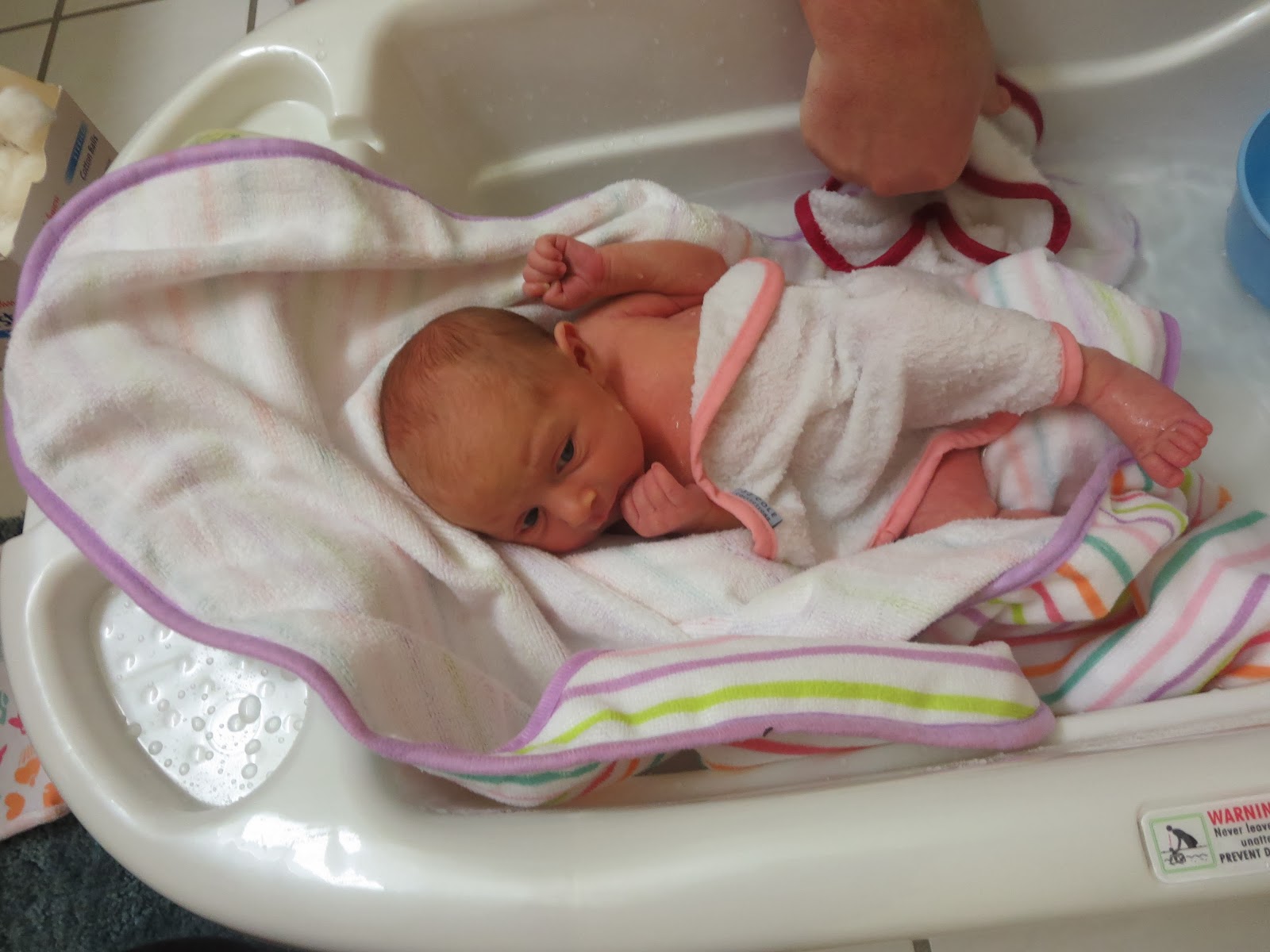 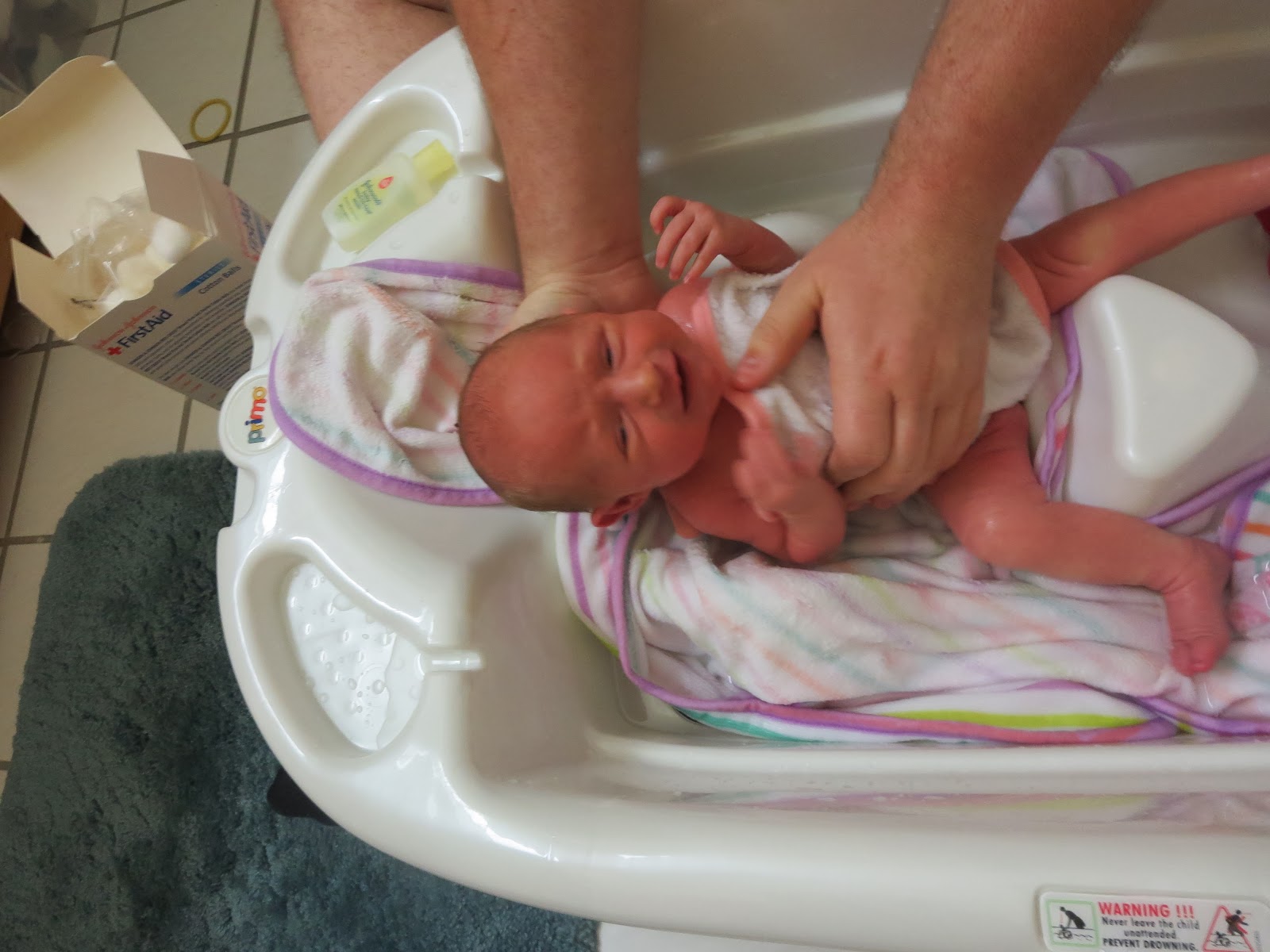 She had her first bath... and hated it. 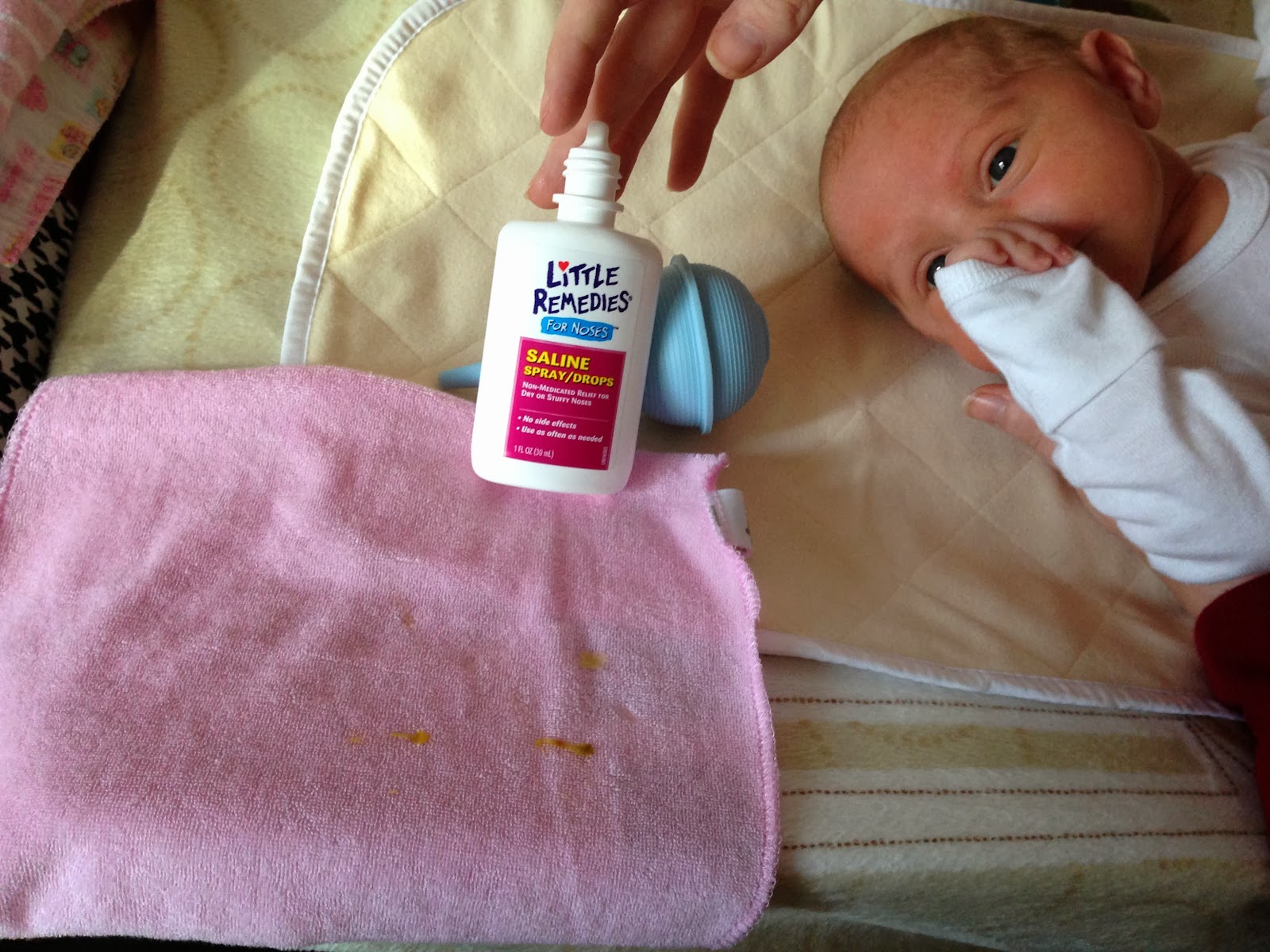 We bought saline to use with the bulb syringe and it worked wonders. It was impossible to get everything out before and after what seemed like torture we still only got a tiny bit out.

She hates her arms being swaddled but we do it anyway. If we leave her hands out of the mits at the end of shirts she scratches her face. This is something I would do too. I mean I did as a baby while in line to get my photo professionally taken.
We haven't even been home the 3 of us for 2 weeks since the first few days were at the hospital and Dave goes back to work in less than 2 weeks. He still has more leave to use up but he didn't want to take all 7 of his weeks in a row. I'm not sure when he's taking the rest though. 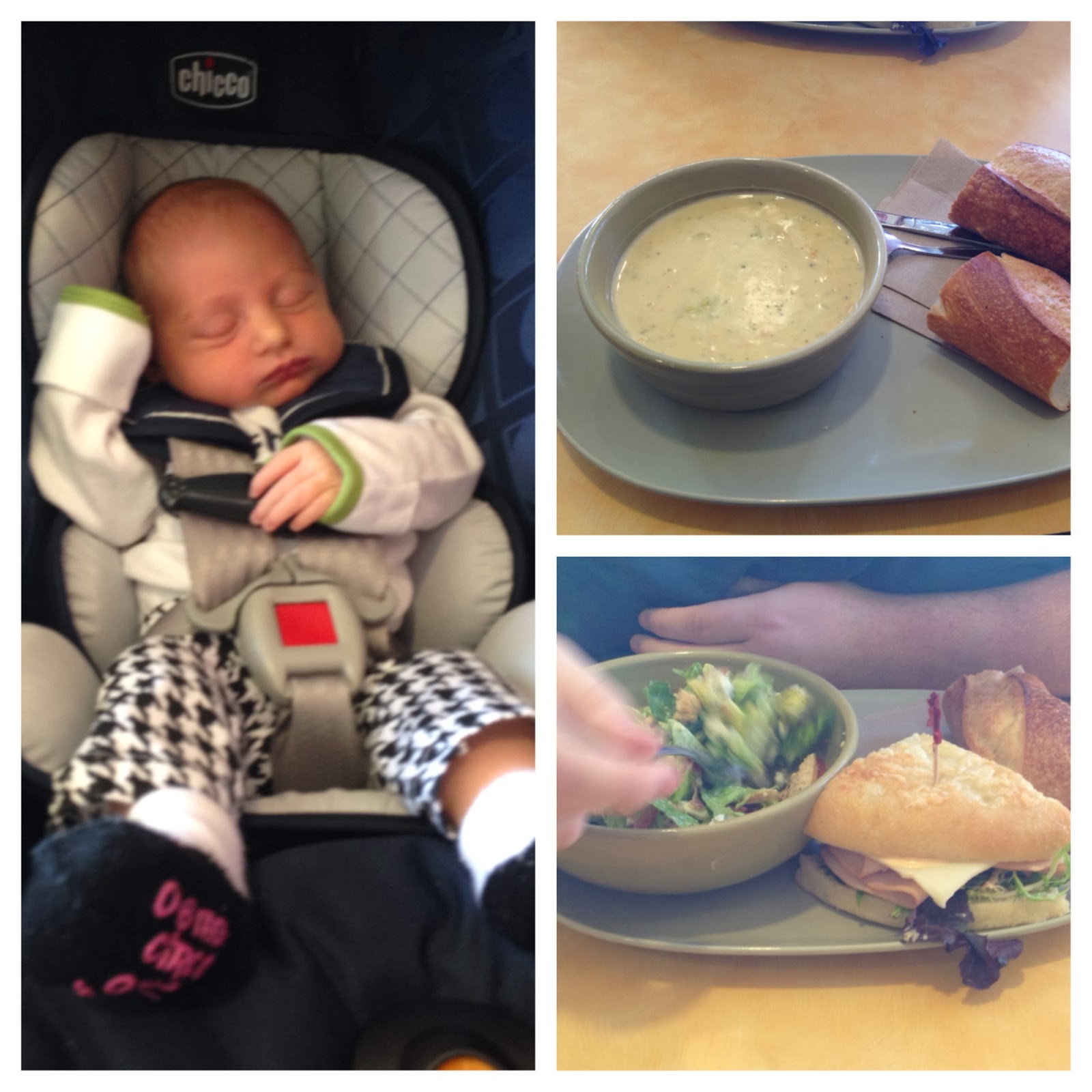 We left the house besides going to the doctors.  We went to Panera. Ella was a perfect angel but if we didn't go somewhere quick it would have been time for her to eat and I didn't want our first restaurant trip to end in crying.

In the past week, Ella has decided she likes to eat a ton. She eats often. She also makes little piggy noises while eating because she wants more food. 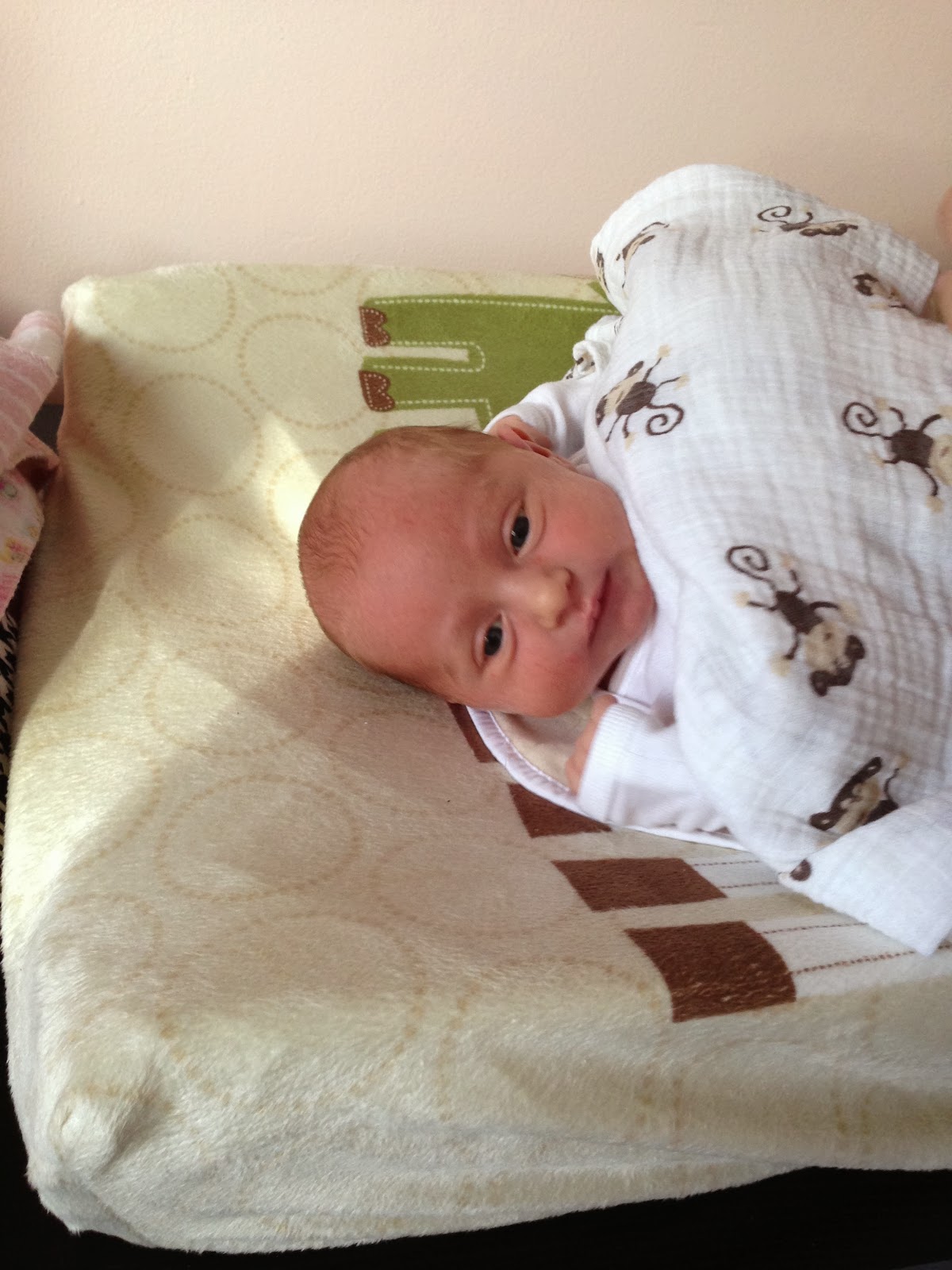 So I hear you are supposed to put one additional layer on a baby than you wear. But I wear more layers than Dave and I'm cold and he's not.  I think this baby is more like him. At the doctors Ella was crying until we unzipped her outfit and took her legs out. Dave's face was dripping sweat. I was only a tiny bit warm. She fights her swaddle until she gets her legs out. I don't tuck the bottom anymore so that her legs aren't as warm.
at 3:23 PM