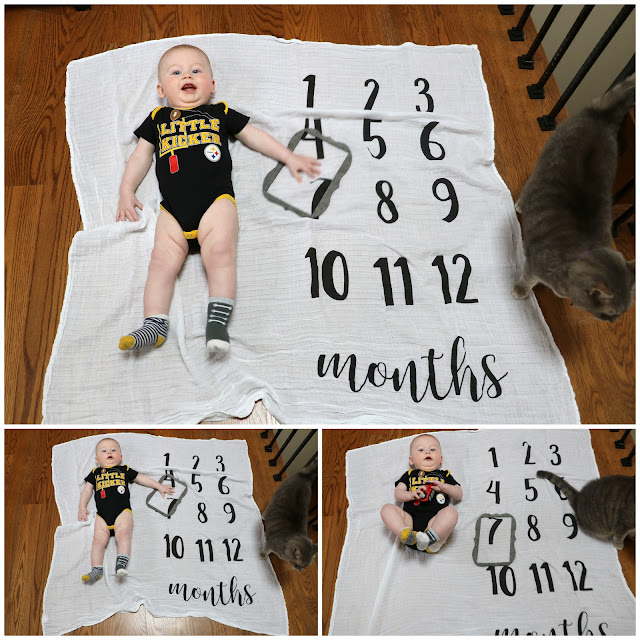 Ella and Miles were at school so they missed photos this time.
Stats:
(stats using WHO, CDC has weight higher and other 2 lower. I never remember which ones I use each month.)


Sleep
Sleep is awful but starting to get a little better as he was turning 7 months. He will take 1 nap in the crib in the morning that is usually about an hour. That is the hour I have to use to get every single thing done in the house.  Later in the day he may nap 1 or 2 more times but only on me. He will wake right up once I put him in the crib. Then he just won't sleep more.  He will wake up a million times at night. He's only had as many longer stretches as shown before because I end up falling asleep int he chair and hold him for 2+ hours of it so then he didn't really wake up.  He often wakes up 3 times before midnight. He is different than Miles in that he will wake up more at first and then have a longer stretch later at night (more toward morning) and Miles always had it where his longest stretch was first. 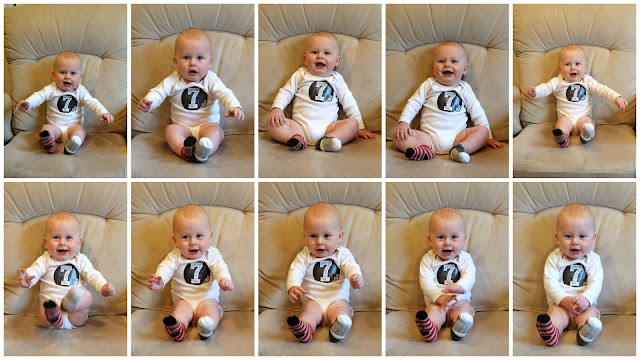 Eating
Liam mostly nurses. He will eat 1 to 2 times in the high chair everyday.  He will no longer eat purees. He just won't do it. He has gotten better at being able to chew and swallow by the end of the month but still not great. He has crackers a lot with his meals. He also won't let me feed him and I put something on a spoon or fork and he grabs it then tries to feed himself.

Sample Schedule:
It's still insane to have a sample schedule.  I'd say the only thing consistent is him wanting to take a nap every day at 8:30 am which became earlier with the clock change. He gets woken up so much from drop offs, pickups, and appointments  or forced to stay awake longer because of those things.  He nurses every time before he falls asleep and when he wakes up unless we are out. He will whine or cry even if I nurse him and put him in the car or stroller. It takes awhile for him to fall asleep even in that instance in his carseat.  Overnight sometimes he sleeps a few hours at first and other times he wakes up 5x within the first few hours. He will have food when I eat lunch and when I eat dinner.  He maybe takes 3 naps a day but only one is a decent nap. 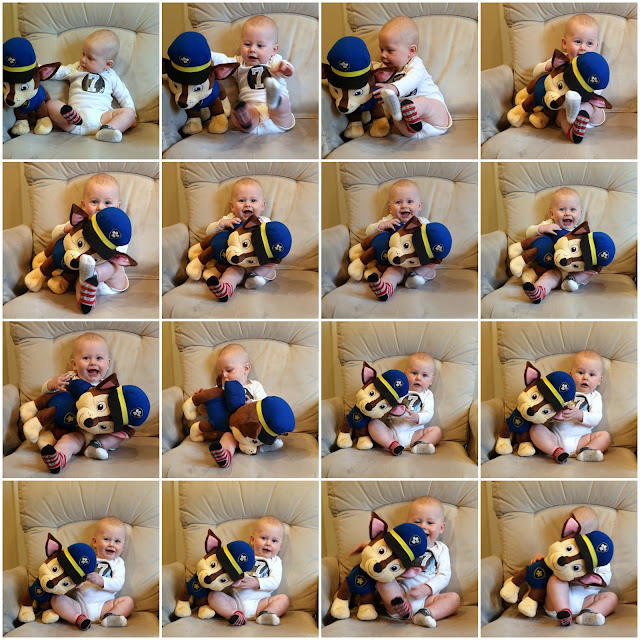 Special Moments:
On October 15, Liam made da da sound.
On October 17, Liam's sleep is so awful. He slept 4 hours in crib with arms out on swaddle for the first time. I ran out to get dinner and Dave was home with all 3 kids awake!
On October 19, Liam had night 1 sleep training. He is mostly asleep on me and i wake him to go in. (But later I stopped doing this because his sleep was just so so so awful I didn't have it in me to deal with tired Liam.) Around 2 pm he stole my partial cookie, a Joe-Joe, and ate some. At 11 pm he woke up again and back to sleep on his own.
On October 20, Ella fed Liam a carrot baby food. He ate almost the entire container.
On October 23, I noted he has said hi, Ella, dada, and yeah. And maybe one other thing.
On October 25, it was Liam's first time in a swing. He liked it
On October 27, Liam ate smoked chicken, mashed potatoes, green beans
On November 2, Liam took over a 2 hour nap. And I had to wake him. It's always so sad to wake him. i'm sadder when a longer nap is ruined. He slithered off the couch onto his head with his feet in the air. I had reached over and grabbed him beside Ella by his foot to lift him up.
On November 3, Ella gave miles a ring pop. He loved it. Liam had his first high chair at restaurant. It was at Outback. He also stole my french fry.
On November 4, at 1:18 AM, Liam was awake in crib when I put him down. 19 minutes later he was too noisy so I went in. He tried his first forward facing in the Ergo 360 but then it was a trick and it was not a 360!
On November 7, Liam had soup at Boudin. Loved it. Later stole piece of cookie. Loved it. (From this moment he for sure would never eat baby food ever again.)
On November 8, I tried special baby scissors on Liam's nails. I made him bleed. They were so dull. It was so hard to use. Clippers are way easier for me. The past few days he has learned better how to eat and swallow food versus push it out of his mouth or choke. He ate pizza at a party.
On November 10, at 3:21 AM Didn’t survive crib transfer. I tried to go to sleep anyway. Finally half hour later he was noisy enough. I go in and he had a massive massive poop. Times like this are why I can't handle just letting a kid cry it out.
On November 11, Liam went on his first amusement park ride that wasn't a merry-go-round
On November 12, Liam went to the doctor for his crusty eye. He was given suave to use 4x a day. It got better after 1 time with it. The doctor said it might take 2 days to get better but then said to continue it for the full 7 days. His eye wasn't pink at all and it was randomly crusty but not when he would first wake up.
On November 14, Liam had a massive spit up. It's like I wonder how he had so much milk in him. I gave him a bath after. He peed in the tub twice.
Development:
He can sit up for longer periods of time! If he's tired, he won't stay upright at all.  He grabs and handles toys a lot better. He will giggle and laugh at things a lot now.  He started being able to eat better. He still wishes he could chew and swallow even better.

Communication:
He has said a few words here or there that we have understood. Hi, yeah, Ella, Dada, Mama he has said a bit. He will babble as a response. 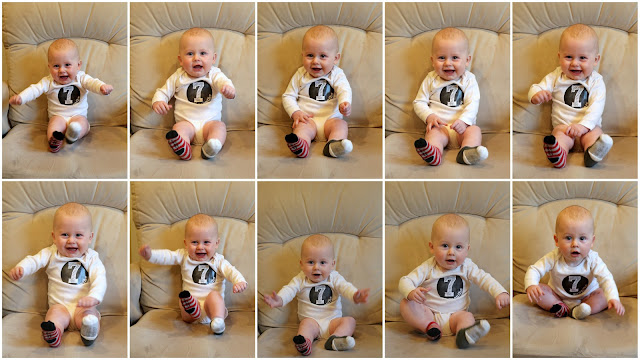 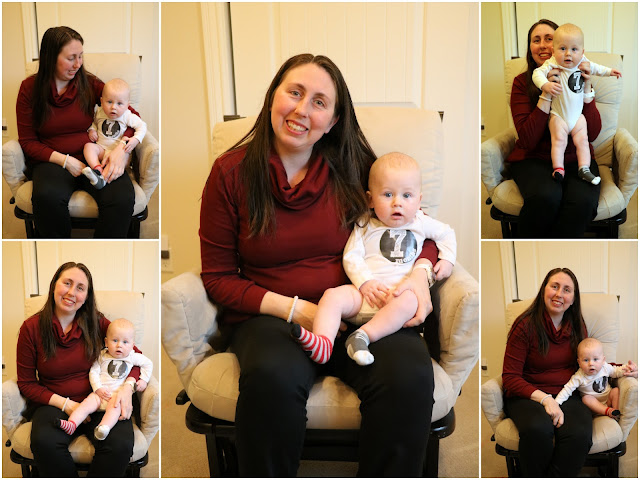 Favorite Toys
Key Teether
Maraca
iPod (music maker thing)
Just random toys he can grab and hold
Things that are not toys!
Favorite Songs
He doesn't react so much to songs one way or the other.

Favorite Books
none yet (He's liked books but doesn't seem to have a favorite)
Other Tidbits
Liam is no longer swaddled and sleeps in a sack instead of a woombie.  He would scratch his face so now I just put him in scratch sleeves. I'm not sure how necessary it is but he sleeps better than he was the couple days without it so I just put it on. He will be so happy and pleasant out and people will think he's the most pleasant baby, but at home plenty of times he won't let me put him down and I have to do everything while holding him.  I usually have to wake Liam up 2-4 times a day to do drop offs or pickups or appointments. I feel so bad for him. 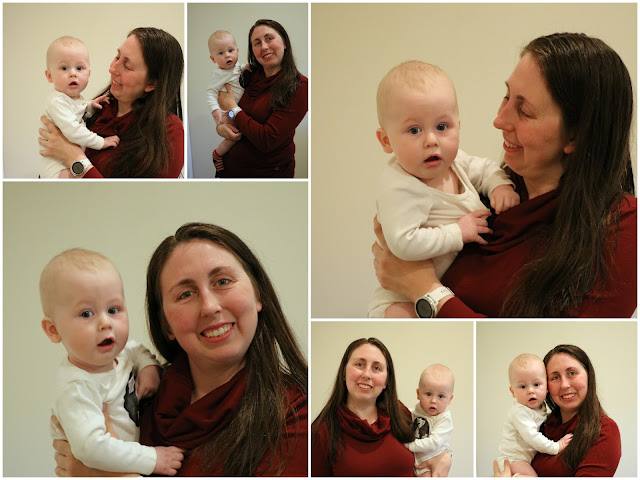 My Recovery
I have used the elliptical a lot and ran a bit more but my knees hurt me when I do this.  I haven't lost any weight even with majorly increasing my steps every day.

Photos were a lot smoother this month without Ella and Miles but I miss seeing them in the photos too.
at 1:45 PM