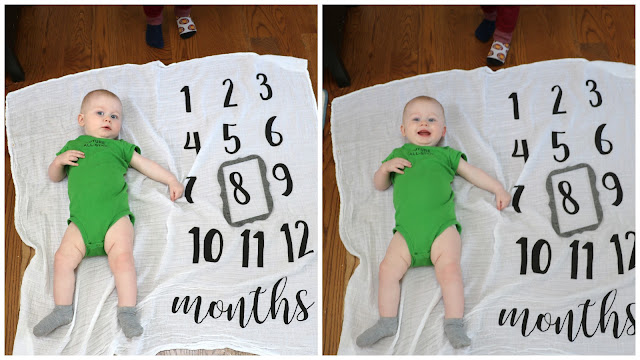 I took his stats days late. I tried 1 day late and didn't find my tape measure and it just kept getting worse. At least my charts app gives the percentile for how many months and days old he is.

Stats:
(stats using WHO, CDC has weight higher and other 2 lower. I never remember which ones I use each month.)


Sleep
Sleep is awful. The awful changes slightly. He used to take a long morning nap but now that is 5-15 minutes in the crib half the days of the week. I feel like he's more of a 1.5 napper since one nap is super short.  He will wake up a million times at night. He's only had as many longer stretches as shown before because I end up falling asleep int he chair and hold him for 2+ hours of it so then he didn't really wake up.  He often wakes up 3 times before midnight.  I could open the data but I don't even want to or I might get more depressed with how awful my sleep has been. 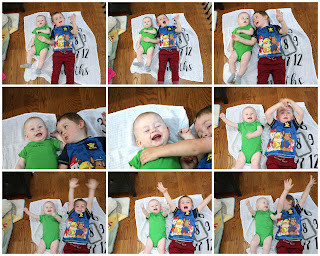 Eating
Liam mostly nurses. He will eat 1 to 2 times in the high chair everyday.  He's able to eat a little more foods than he has been. He can't wait until he gets more teeth. Now instead of using crackers as an appetizer until I get real food situated, he picks them up and crumbles them. He just wants the real food and is sick of crackers. Sometimes he will eat them and you know he's hungry. 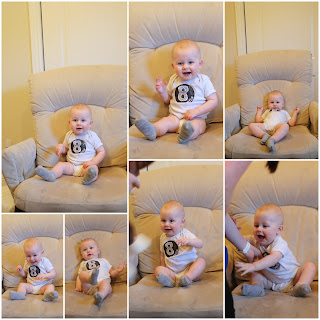 Sample Schedule:
It's still insane to have a sample schedule.  I'd say the only thing consistent is him wanting to take a nap every day at 8:30 am. He gets woken up so much from drop offs, pickups, and appointments  or forced to stay awake longer because of those things.  He nurses every time before he falls asleep and when he wakes up unless we are out. He will whine or cry even if I nurse him and put him in the car or stroller.   Overnight sometimes he sleeps a few hours at first and other times he wakes up 5x within the first few hours. At night sometimes he wakes up consistently all night. Other times he sleeps for 5 hours then wakes up every hour or 2. Then other times he wakes up 5x early on then will sleep 6 straight hours.  He will have food when I eat lunch and when I eat dinner.  He maybe takes 2 naps a day but only one is a decent nap. 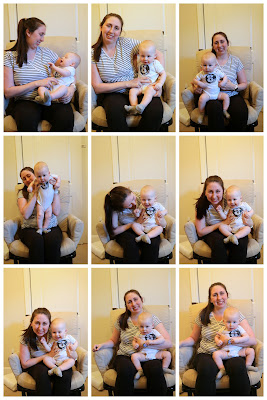 Special Moments:
On November 18, Liam had his first popsicle. Late at night Liam had a snotty nose.
On November 19, Liam woke up saying mama. Liam hates his nose being wiped.
On November 21, We ran to get Ella forward facing in the stroller.
On November 22, Liam fell sitting on the hardwood floor. He got a back eye
On November 25, Liam still has cold about a week.
On November 29, Dave is home with all 3 kids while I get my MRI. I was gone for 1:40 total.
On November 30, we were at Best Buy.  They turned on tunes to try out some speakers. And then Liam was dancing and dancing .
On December 1, at 9:52 PM Liam woke up AGAIN. This time Dave went in and got him back to sleep! Then he cried after 3 minutes and dave went back in. Dave went back in again but it failed. At 10:15, I ended up going back up.
On December 2, I note that Liam seems to have 2 naps a day now.
On December 4, I tried to sleep train. I gave up after  ~50 min. He would hug my arm so tight. When I picked him up I never got a hug so tight.
On December 9, 2019 at 10:34 AM Woke up super early for nap saying mama
On December 10, Liam went down the slide for the first time.   At night Ella and Liam were on the chair and Liam fell off onto his head.
On December 12, Liam drank cold milk from sippy cup. (Cold pumped milk but it was in a sippy not a bottle.)

Development:
He can sit up for even longer periods of time! He will sit and play for a decent amount of time.  He can hold a sippy cup and get water himself without any help. He does this often. He liked to stand and a standing table this month but doesn't last very long. He will go in to give a high five sometimes.   Sometimes I noticed he will pinch food between his pointer and thumb to pick it up.  He puts everything in his mouth. He really loves to try to eat paper. He likes to reach and grab tissues then tear them apart. He talks or sings. It seems like he will answer or call when appropriate so he knows how to answer. I can tell he understands words/sentences. 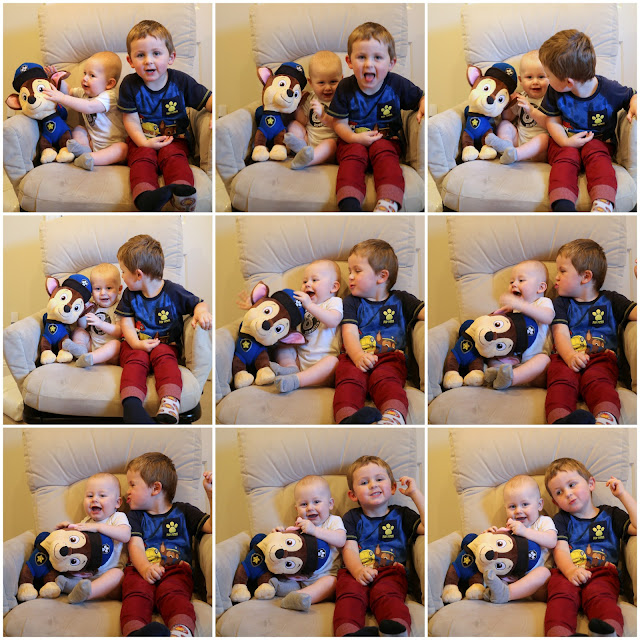 Communication:
He has said a few words here or there that we have understood. Hi, yeah, Ella, Dada, Mama he has said a bit. He will babble as a response. He mostly only says Mama when in the crib and he woke up. 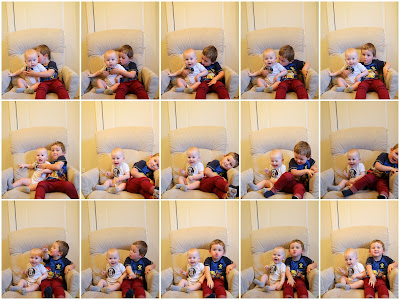 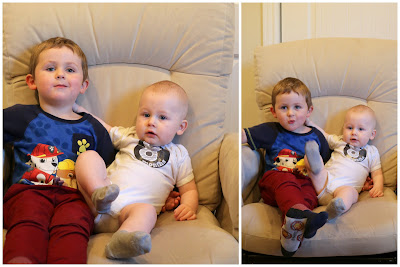 Favorite Songs
He doesn't react so much to songs one way or the other.
He will cry in the car until I turn on Coffee House and then he will sigh and like it. (He does not like when I listen to politics.)

Favorite Books
none yet (He's liked books but doesn't seem to have a favorite)
Other Tidbits
Liam seems to only want me a lot when he's upset. Someone else holding him just makes it worse. If he's on the verge and I give him to someone else to do something quick, he freaks out crying. 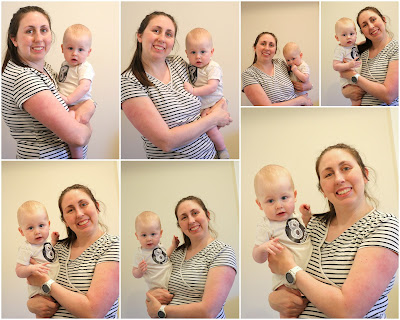 My Recovery
I have used the elliptical a lot and ran a bit more but my knees hurt me when I do this.  I haven't lost any weight even with majorly increasing my steps every day. My right knee bothers me a lot. It was my left and I think I overcompensated too much.

Ella didn't want to be part of the photos this month.
at 5:28 PM