Photos were taken a day late so Ella and Miles could participate. They are a little crazy so photo quality isn't that good. They also took over 400 pictures!
Stats:
(stats using WHO, CDC has weight higher and other 2 lower. I never remember which ones I use each month.)

I took his weight just after nursing and just before he peed and spit up. 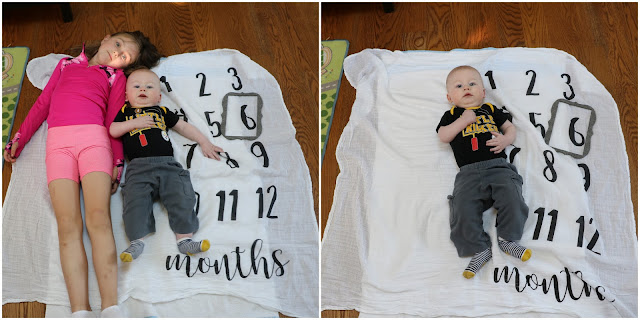 Sleep
Sleep is awful. From 5.5 months old and on he was waking up so much. Some nights 9 times in one night. Other nights he just wouldn't go back in the crib without crying.  He will cry when I put him down and immediately fall asleep in my arms when I pick him up. I have tried to hold him longer before putting him down but he will seem sound asleep and then wake up and cry immediately. I have tried various things that seem to help some and then don't help.

Eating
Liam mostly nurses. I feed him once a day if i feed him. He will have purees. He has tried to steal some food. He had his mouth on my pizza and my burger. After he tastes that, he doesn't want to eat baby food anymore. It's hard coming up with foods to give him. I remember always having issues with this age. They can't quite chew or swallow right but they sure want the food. Liam still pushes the food a little forward when he's trying to eat. 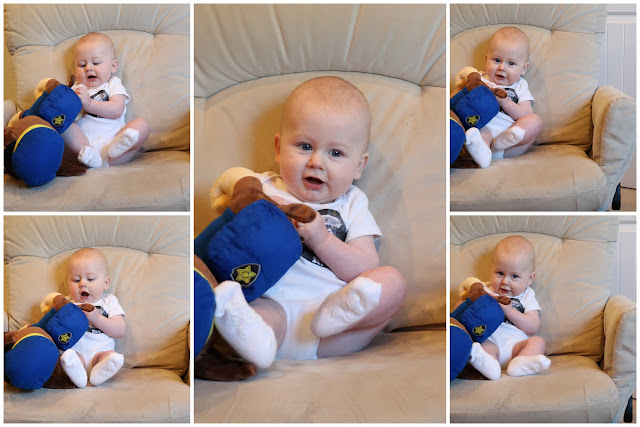 Sample Schedule:
Having a sample schedule is a bit ridiculous. Around 7:30 PM, he likes to start nursing to go to sleep. He wakes up at least 2 times in the middle of the night but lately it's more like 4. Everyday I wake him up between 1 and 4 times to go to appointments, school pickups or school drop offs. Throughout the day he's awake 1-5 hours between naps except the very first one of the day it's usually 1.5 hours. He may start getting super clingy before 6 pm but he will not go to sleep that early He still seems to manage 3 or 4 naps a day. (4 naps only happen when I have to wake him up for things.) Sometimes he wakes up from nap and I can tell he's still tired and wants to sleep but for some reason woke up. I nurse him then and he goes back to sleep. Usually if he goes back to sleep, he will only continue his nap on me. Mostly I try not to nurse right when he wakes up. I'd say the only things sort of consistent for a schedule are when he wants to go to sleep and he likes to have his first nap around 8:30 PM. 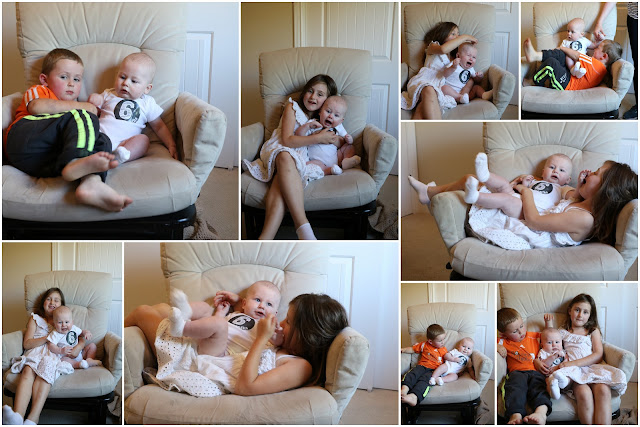 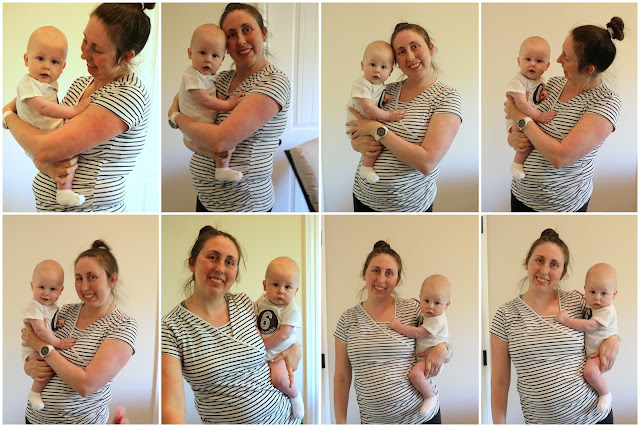 Development:
He can sit up! He can be held wrapping his legs around my side now! He grabs toys and things a lot better now. He can hold onto them too. He can pull himself up to leaning forward when put in his carseat before he's buckled. He tries to put everything in his mouth. He sits but it's not sturdy. He will roll and change angles but doesn't do it much. He may shimmy a little too. 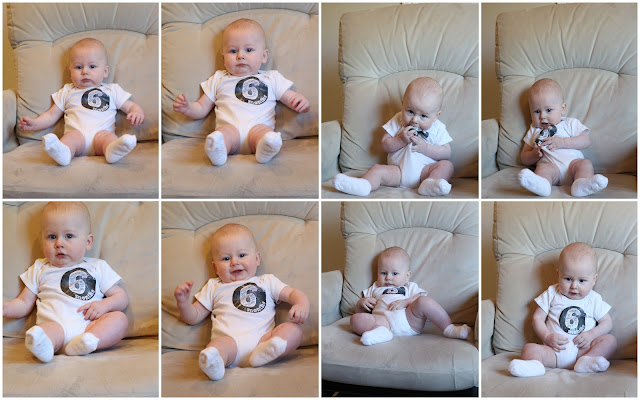 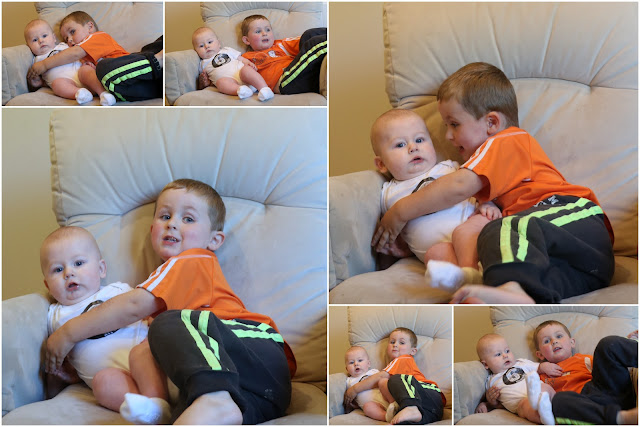 Favorite Songs
He doesn't react so much to songs one way or the other. 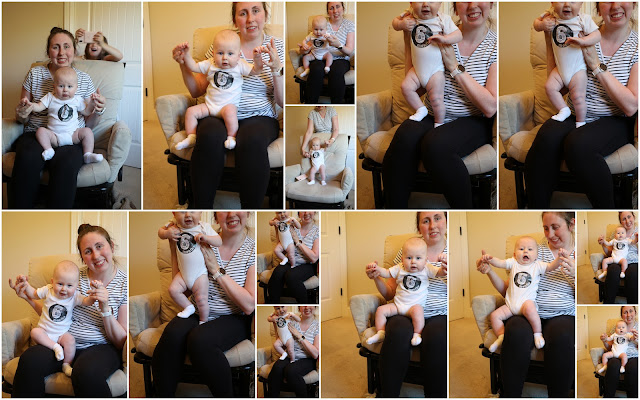 Other Tidbits
Liam gets so happy and smiley when he's quite tired and needs a nap. If you don't get him down for a nap in this time, he can quickly change from happy to crying like we are killing him. He doesn't use his play mats a lot because we seem to always be going one place or another. He likes to be in his carseat carrier a lot better than being baby worn. But he likes the Ergo better than the Ergo 360. I haven't done the 360 forward facing so it's just sitting the same way against me and he likes one way better than the other. I have to shimmy him up when I put him in his carseat. He's set too far down for the bottom buckle to buckle when he naturally goes in. His shoulders need to be higher than the default.
When Liam is super happy and smiley, I know he's tired but everyone else just thinks he's so happy. He will be so happy and then when I lie him down on the changing table he cries. He's mad he's not immediately nursing. I put him in the woombie and then I nurse.

Just in general having 3 kids is no joke. There is no time for anything. I've been trying to spend all my free time working on this post for 2 weeks! 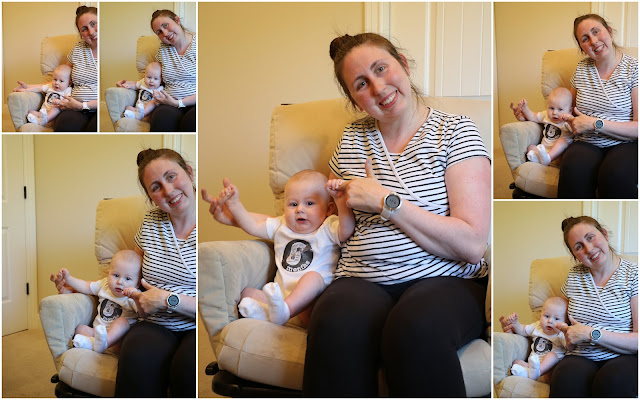 My Recovery
I have not lost or gained weight this month. My knee is still stiff a lot. I tried to get into PT for my knee but they never fit me in and I never called them back. I'm so tired! I keep wanting to stay up later to get stuff done like blogging but then I'm just too tired. I still have 40 lbs to lose. (By the 3rd kid I don't have my current weight or the starting weight exactly memorized and I don't look it up. I might actually be at 42 lb to lose. I have gained 10 lbs since June so I did drop some weight then gained it back.