Last week I didn't work on the registry at all. Dave did for a few hours. I think he added a couple things. He was using a book so I guess what he added he did some research. The only thing I remember him telling me about is a high chair.   Today he is asking me about ordering a rocking chair.

We bought a stethoscope this week. We used it the day we got it to find the heart beat. I just used it now to do it again. It was a lot easier to find this morning than last time.  I always try my own heart beat first to make sure I'm doing it right.

My dreams have been pretty crazy during pregnancy but then they started mostly focusing on code. I think I have only actually been pregnant in 2 of my dreams. But last night I had my first dream that we actually had a baby. Somehow this baby was just a day old but could crawl or something because we lost her. We also kept calling her Poly in the dream by mistake.
Size of baby: Pomegranate, 11.4 inches long from head to heel. My app on my phone says the baby weighs about 1 lb.

Total Weight Gain/Loss:  5.8 lb gain overall. I gained 0.7 in the past week. I was actually higher earlier in the week by about 2 lbs but then got a stomach bug and dropped those 2 lbs in 2 days. My I'm Expecting app on my phone says I should have gained 12-15 lbs by this point. But that doesn't take into account of losing a lot of muscle that I lost.  If you take my lowest weekly weight and compare that to now, I am up 11.5 lbs, which is probably more like what the comparison would be. My muscles are just all gone anymore.


Maternity Clothes:  I wore maternity clothes everyday during the week but on the weekend I did not. I started sleeping in a maternity shirt versus my old shaw shirts because they were all dirty. The maternity shirt is too short to wear with maternity jeans now anyway or it would show the elastic that is supposed to be hidden. Sometimes in the night my back gets exposed from moving around. The only non-maternity shirt I've been wearing is my Dev Bootcamp shirt and I try to wear that once a week but seem to fail at that plan. I want to wear it once a week until it no longer fits. I do wear a black cami under it and wear a white cami under a few other shirts. Both cami's are not maternity. I probably should get a maternity cami one of these days.  In the next few days I'll probably make another post with some of my recent outfits. I think I have until August 23 cropped and ready so I might just post that and not include the last week if I don't have time to get to it.

Movement: The kicks are a lot stronger this week.

Sleep: This is about the same as it has been. Dev Bootcamp related to lack of sleep not baby related. I did sleep more for 2 days sort of because of my stomach illness. I didn't go to class one day and went late another. But I was up going to the bathroom and then back to bed so it wasn't solid sleep.

What I miss: I miss functioning without being lightheaded. I was ready to pass out yesterday after walking 2 blocks from the bus stop to class.


Cravings: Nothing yet.  When do these usually start? 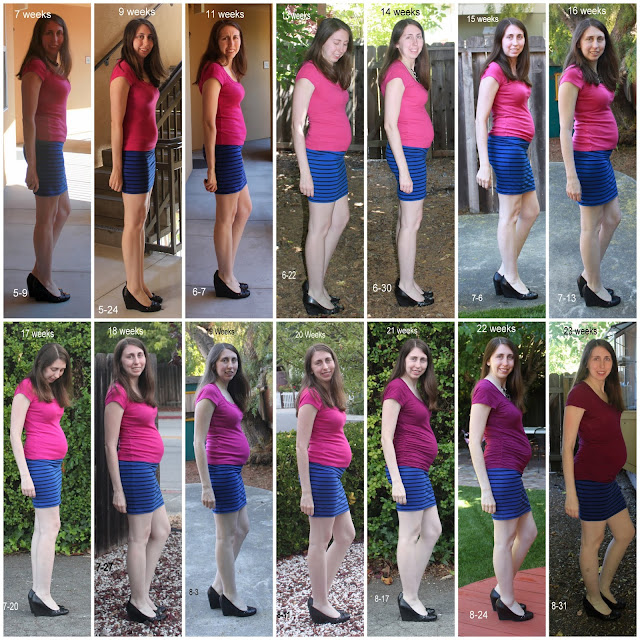 Symptoms: Can't think of any. Maybe my butt gets number quicker on the chairs that are on the ground at DBC (I learned they call them flap jacks).  I also can't sit like I used to before because it smashes my stomach more but not really. Well it just maybe scrunches it more.  I normally would sit leaning back with feet on floor and knees in air and take notes on thighs but sometimes I have to put my legs down straight or indian style.

Best moment this week:  I guess hearing the heartbeat even though it was tough to hear.

Looking forward to:  Getting more sleep in 3 weeks. What Dave does to the nursery. Finalizing a name.  Showing even more so people still aren't shocked when I mention I'm pregnant. I guess the threshold for a guy to think you are pregnant is looking really pregnant.  Cleaning up this mess of a house as soon as DBC is done. Around the sink and in the shower are getting so gross.

Exercise:  I only biked Monday - Wednesday. Wednesday evening I really didn't want to bike an biked so slow. I felt so miserable. I only walked from DBC to the train station Monday and Tuesday evening. Thursday I didn't do a thing and stayed in one position pretty much all day. Friday I just had to walk the couple blocks from the bus stop to DBC and that was rough. Then the reverse walk at the end of the day was super bad. Once I go to Mountain View I had to walk about 10 min to get to Dave's car and that really sucked. Oh one day this week I wanted to get Poly to come out from under the bed so I tricked her. She always likes to get up in my grill when I do an ab workout or push-ups so I did some push-ups and it lured her out. I ended up doing 7 before she ventured out. So now I know I can still do at least 7 push-ups. I remember 7 years ago or so I did 5 push-ups and was sore the next day. Well I was not this time.
The bruise is from almost a week ago when I ran into a chair at DBC. I only remember how I got it because after I did that I mentioned how I'll probably end up with a bruise but usually I notice a bruise and have no idea how I got it.