I had another card party with all different people.
I did repeat 1 card from the last card party.  This one was a big mess.

This set is retired but there is a similar set on page 19 in the current catalog. I used Crumb Cake paper and Chocolate Chip ink. We sponged the edges in Crumb Cake. The card on the right above has no sponging to show the difference.  There were 11 total people and we all made this card before I demonstrated the rest.

I demonstrated this card second but they had to wait to make it until I demonstrated the third card. We split into 2 groups since there were 11 people. That did not work well.
I used Daffodil Delight, Melon Mambo, and white cardstock. The butterfly is stamped in Rich Razzleberry. I sponged Daffodil Delight and Melon Mambo on the butterfly and stamped the words in Melon Mambo. I punched a butterfly out of Melon Mambo to glue on the inside but didn't take a picture of that.  But the end even though I had separate sponges for light colors, all my sponges were extremely dark because everyone used them for everything and if Crumb Cake ink wasn't nearby they used Chocolate Chip (card above).   I've gone 7 years and only used 1.5 sponges of the 3 pack and I think after this party I have to use new sponges because they are so bad. 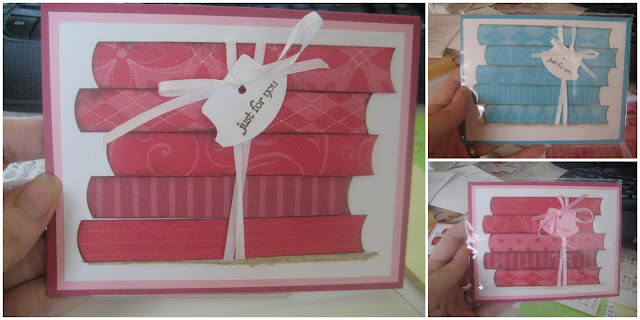 I did 2 choices for the next one. I should have never done this card. Sponging the edges of the book take entirely too long. I was even going to stop at 2 cards but was tricked into another. The card with Rose Red DSP has a Rose Red base and a layer of pretty in pink. The Tempting Turquoise DSP has Tempting Turquoise base with white.  For Rose Red, pink or white ribbon could be used or a pink or white tag. There was too much variety.  I cut enough supplies for 15 sets even though I only needed 10. Well some people ruined strips and took more. Also some people made a second card of one while waiting for the other so when the other group had to go I did not have enough paper.  Well first off an extra person showed up so I was already pushing it.

I wanted to do more simple cards but was pressured into showing how you use punches and layers and everything and how it is tied together. I knew with so many people that would be bad. I'm pretty sure nobody will order. I also had to drive over an hour to get there and pay $6.50 to park.  I hope the 2 who organized the party order enough so that I don't lose money.  I should probably hope they don't read this because I complained about the party.   I already had the supplies cut for the first card and was sort of asked to plan a different one instead. I'm glad I put my foot down for that at least.
at 1:00 AM

Email ThisBlogThis!Share to TwitterShare to FacebookShare to Pinterest
Labels: cards