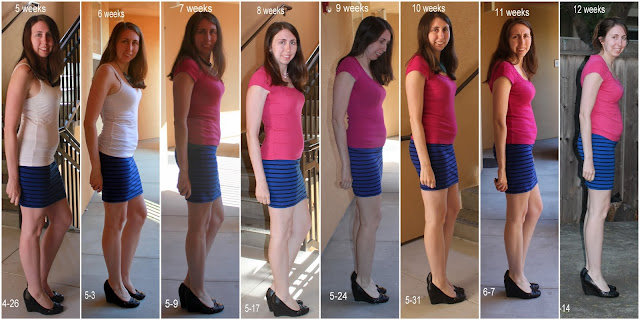 I'm looking quite pregnant now, but especially after I eat.

Total Weight Gain/Loss: 6 lb loss. Apparently I lost a half a lb from the weigh in a week ago but the day before I was up that half lb and the next day I was up 2 lbs.

Maternity Clothes: No and my normal pants mostly fit better than they have been. With most shirts it's noticeable that I'm pregnant. A couple pairs of jeans don't fit that well but these jeans also didn't fit me a few months ago.

Cravings: Nothing yet. I still want the same foods I've wanted since I've moved. I want a good meatball hoagie and some fried zucchini.

Aversions: Nothing really. Maybe I just like food too much.

Symptoms: Nothing new.  The main one now is lightheadedness. That is almost all gone too.
Already mentioned but still going on: Thirstier, sense of smell, lightheaded. I haven't been nauseous in awhile. At least being thirstier helps with how much pregnant women should drink. The increased sense of smell is nice when the smells are nice.

Best moment this week: going for a run (even though it was super short)

Looking forward to: Actually telling people. My next doctor appointment on June 19. Being able to exercise!

Exercise: I ran around the block. Then later that evening I went for a walk. All in the same day but I finally did something.

So I always talk about expanding when I eat. Most people don't seem to believe me. Or they  never did. Well I had Dave take my picture before and after dinner. I made a collage. Now do you believe me? 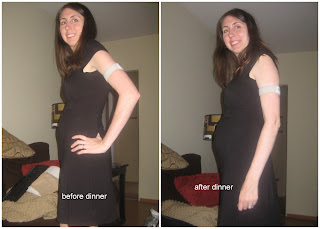 I never took a before dinner and after dinner picture before I was pregnant but now I'm really wishing that I had one somewhere.
at 2:30 AM