On July 6, I went to Target and looked at some maternity clothes. I don't really need them yet but after Dev Bootcamp starts I won't have any time to shop. I bought 4 shirts. They were a bit expensive but I really liked the one style so I bought it in 3 colors.  After doing some research online for different stores other people complained that other stores had the shirts too thin so you had to wear a cami. These from Target don't require a cami so I guess it's a good deal. In the next week I still need to buy some maternity pants. I have also been given recommendations on a belly band but at the same time other people said they hated the belly band. So I'm not sure what to do there.

I actually didn't take the Week 15 photos after I ate so that is more baby than dinner.  I googled pregnancy collages to see what other collages are out there. It's crazy. People range a lot with how early they show. Also people range in what they share. Some people had the picture zoomed in on their stomach but you could see they weren't wearing pants and just had on their gutchies.   I was in a hurry this week since my mom was trying to do a google+ hangout with me and was waiting. I still took about 30 pictures.  If I don't have an exact side profile, sometimes you can't even tell I'm pregnant.

I had my first dream where I was pregnant at the beginning of the week and I was shopping for maternity clothes at Target. Then the next day in my dream, I was much further along in the pregnancy and something went wrong (not sure what) so we had an ultrasound and it showed we were having a boy. So I wonder if we will have a boy or girl now. I wonder if I'll have other dreams that disclose the sex of the baby. 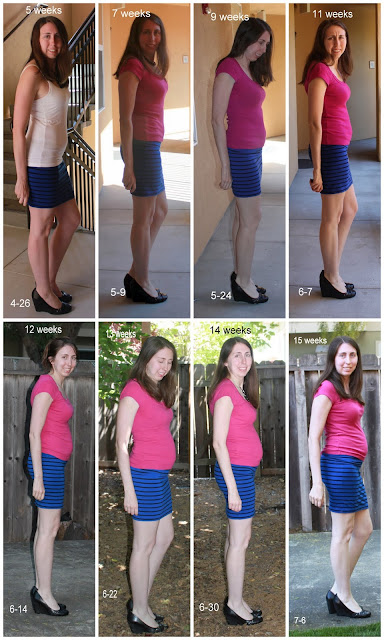 Maternity Clothes: Same as mentioned last week: No but some of my jeans don't fit after I eat.  It's been hot and my jean shorts are still big. I've worn skirts but only the stretchy kind. Mainly because those are the only ones I wore here anyway. The others just seem too dressy for California even if they might fit.

Gender: We will find out on August 3.

Movement: Not yet. I haven't tried to pay attention but I think I have a few more weeks before it's even common to feel movement.

Sleep: I wake up maybe 1 time to go to the bathroom near 6 am. Just this past week Dave has kept me up too late and let me sleep too late. Just in time for Dev Bootcamp to be starting in a week when I will have to wake up at 6am.

What I miss: Working out without getting lightheaded or working out in general. I did workout some but not nearly enough to not miss it.

Symptoms: Nothing new.  The main one now is lightheadedness. That is almost all gone too. I did get some headaches but nothing major.  Well maybe not almost gone because shopping gets rough. I can't handle standing that long I guess. Even if I eat right before going to Target.

Best moment this week: Buying my first articles of maternity clothes.  No no no I think exercising might have been a better moment.

Exercise: I biked to and from the train station with Dave. He got ahead of me. I was slow. I also biked to and from seeing fireworks and walked about a mile after biking to where we biked to before we found our spot to sit.
at 1:30 AM