After midnight so it was on September 3, I felt contractions.  On September 2, I had a lot of pain/pressure in the lower abdomen/belly for a few hours but no contractions.

I stupidly deleted the contractions in the app before emailing myself the data so I don't have the specific details of it.

I just looked at chat history and at 11:57 PM, I told Gio that these contractions were much stronger than the contractions on Sunday. So I guess I had a few before midnight.  I believe the first one I officially timed was at 12:10 but I was just looking at the time on the clock and didn't use the app. It stopped at 12:12 but not sure how far into 12:10 it started.  The next one I used my app and it was at 12:20.  So they started 10 min apart and got to about 6 or 7.

I decided to get out of bed and try a new position. I still had the same level of intensity sitting and lying on my side. In bed I was on my back. When I was standing and walking during a contraction it felt stronger and then was shorter.  I was texting Gio at the time and told her I was probably going to trip so I should quit typing on my phone as I walk around our messy living room.

At 1:15, I decided to try to sleep through the contractions. I woke up a couple times and hit start for a contraction.  The stupid cat woke me up 3x jumping on me and meowing at me.  I knew the couch was not going to work out because she was a punk. At 1:55 I went into bed and slept. I was still having some contractions but was not timing them. They'd wake me up but it felt like they were further apart when I got more relaxed sleeping.

My nights sleep sucked. I was up a lot. I felt contractions more at first. I woke up a few times and peed. Once it was daylight it was tough to fall back to sleep. I feel like once I woke up for good, there were definitely no contractions. I still had the low pressure of the night before if I was walking around. 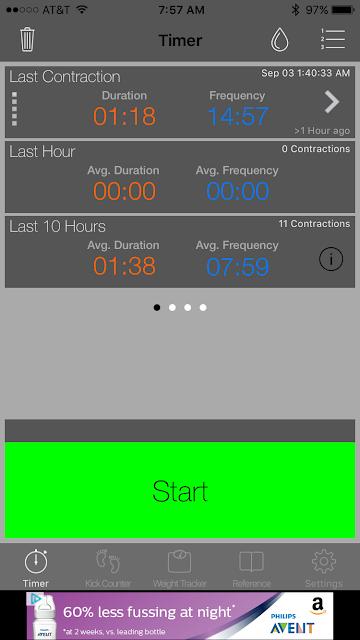 This is the screen shot of the contractions app. 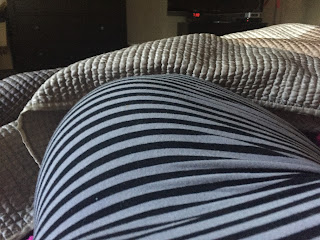 In the morning when I woke up this is how lopsided the baby was!
at 9:03 PM

Email ThisBlogThis!Share to TwitterShare to FacebookShare to Pinterest
Labels: baby 2