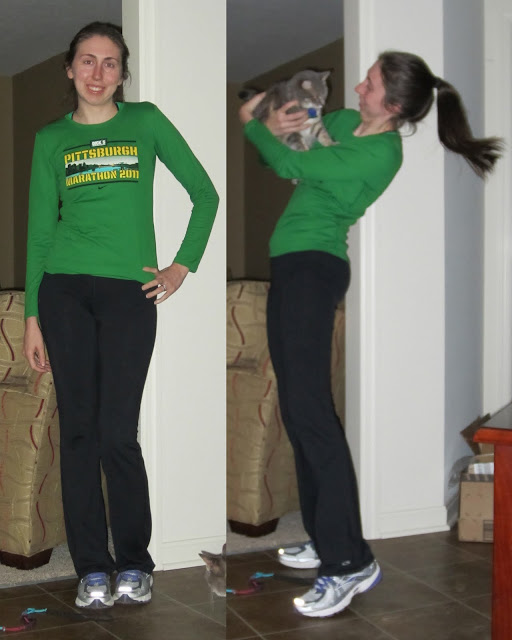 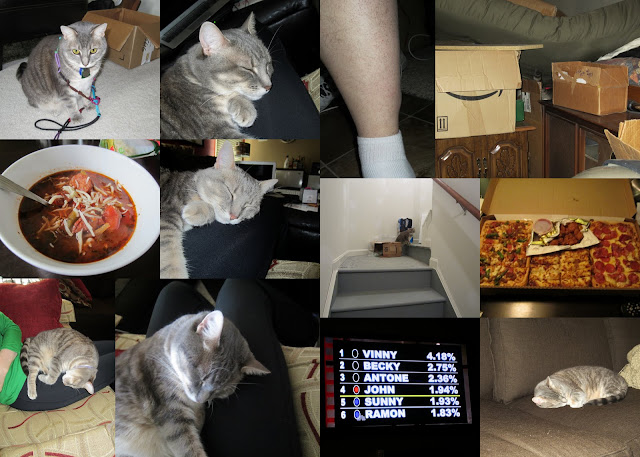 Yet another uneventful day. It is great.

I started out running the 5k.  Then I came home and used the computer for a bit. It was time for lunch.  Then time for TV. Basically I was forced to watch more TV because Poly was on my lap.  I used my laptop at this time too.

Around 4 we went to the track to go for a walk.  Dave had some issue with his ankle or well above his ankle. Not sure what it was. Kind of a bulge sticking out of his leg. I'm not sure what it means so we called it quits.(The picture above doesn't do the bulge justice)
But we did come home and lift weights in the basement.  He lifted for 30 minutes. Since I'm still sore from Body Pump and shouldn't technically lift 2 days in a row, I only lifted 15 minutes.

We carried some Christmas stuff upstairs and ordered a Pizza.   I watched TV until the pizza arrived. I watched TV while I ate. Then after I watched some more TV.  I carried some more Christmas stuff up. On a break, Dave came down and helped me move the recliner to the porch. I got out the vacuum so I could vacuum under where the tree will go.  I didn't do any of that though and went back to watching more TV.
Poly was on my lap again so I was forced to watch even more TV. It was after 10 by the time all the TV watching was done.  I watched 3 episodes of the Biggest Loser and 2 episodes of Unforgettable.  I watched 2 episodes of West Wing earlier in the Day with Dave.

On the Biggest Loser it made me so mad when the one girl fell in the bottom 2 by 1/100th of a percent, because they only weight them based on whole numbers.  They need to use a scale with at least 1 decimal point. Oh  man it makes me so mad.

As soon as I woke up I put on workout clothes. Since I knew I'd workout with Dave I didn't shower and left them on but then it so happened I wore them all day. They also happened to mostly be the same workout clothes I wore Friday.
at 5:00 AM