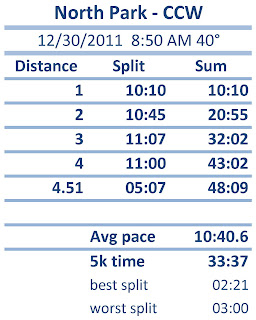 Jen and I ran in the morning. She was ahead of schedule so I rushed in the morning to get there.  It ended up much warmer than either of us anticipated and we were too bundled up. It's funny how 40 degrees with a lower windchill ends up too warm.

The run was a struggle for me (well both of us).  We did our normal run:walk routine but we had to slow it up.  We were having difficulty talking while running.

I wore my new compression socks. I got them for Christmas. I didn't ask for them but was debating getting t hem for myself. My shins just bother me so much lately that my running in December has severely been lacking.

I also wore my new arm warmers.  They were quite warm.  I had on a tank + arm warmers, then a light jacket on top. I ended up removing the jacket after about 4 miles. I removed my gloves much earlier than that.  I left my headband on because I didn't want super messed up hair. 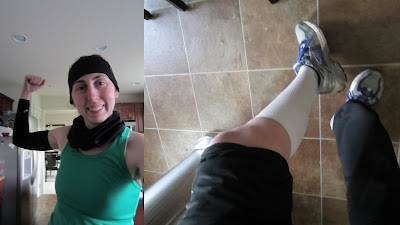 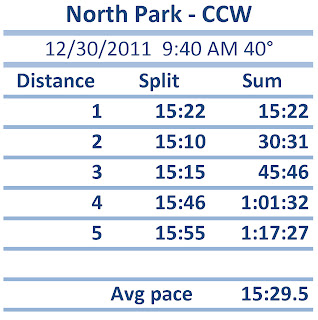 After we were done with a shortened loop, we walked the entire loop including the big hill. The walk went by so fast. We got so much talking in.  We were walking pretty fast.  It did start to rain a little during the walk, but it wasn't bad.

My BodyMedia fit even had me at vigorous activity during the walk. I can't think of a time that ever happened before.  Probably because it was so soon after the run.  Jen and I tend to run then stand at our cars talking for 15-30 minutes so we might as well walk and get some more exercise.

My garmin had distinct differences between "Time" and "Moving Time" and I don't understand it. Each mile almost has a 1 minute difference.  We were moving the entire time.  I only remember my old garmin having a 2-5 sec difference and usually that was when I did an out and back so I thought it was the couple seconds that it didn't realize what specific point I went to.

The slight dip after 5 minutes was the bathroom break.  The next dip was the stop back at the car to remove some layers.  I can't believe the walk had me at such a high calorie burn.

I tried the compare feature on the Garmin and it just gave me all of the things above.  They weren't all at North Park. I think it just did a distance compare.  I put check marks by the ones I think I ran with Jen.