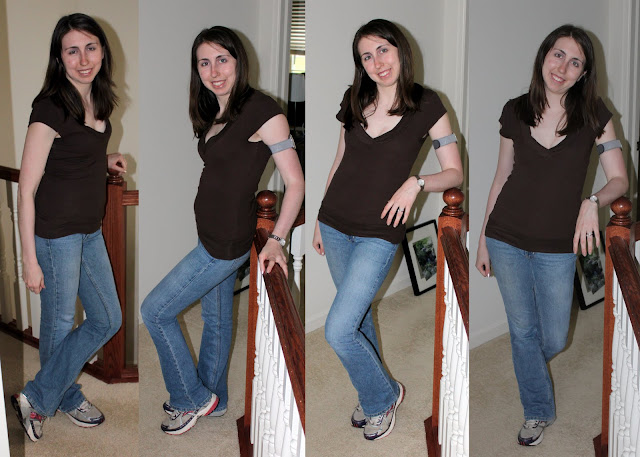 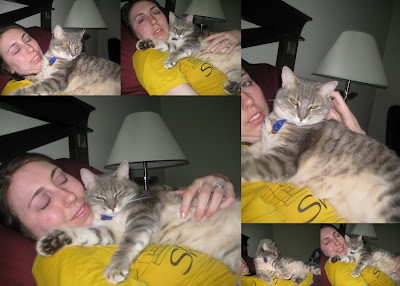 I set my alarm to wake up early. I had an extensive to-do list. Poly was on me so I had to cuddle and kept hitting snooze.  She was snuggling her head up against my head. It was nice. She was purring up a storm.  So I stayed in bed an extra half hour and got some more rest.  I immediately got up and put laundry in. My timeline of laundry still didn't work out right. 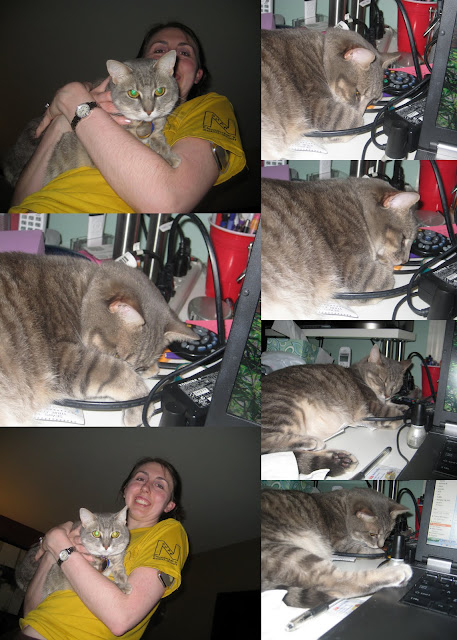 I used my computer a little and was logged into work. Poly liked me. Maybe she  just liked the heat of my computer.
Blogger was down most of the day but at least it came back so I was able to post.

I went to PT at 10:45 and had a 4th person working with me.  This time my visit was the shortest. He was ready to stretch me before I was ready so then he stretched me and then after I finished my exercises. That is the best.  After PT, I went to lunch with Dave.  We went to Boston Market. We were going to go to Jersey Mikes but their parking lot was packed so we headed to Boston Market. It was very nice. I didn't like the stuffing this time as much. The carrots weren't cooked enough.  Dave liked it so he got mine.  After lunch, I headed to the gym.  I ran 1.25 miles then I used the elliptical for 15 minutes. I did some abs, stretched, and did an IT band exercise.  I was very sore from Body Pump on Thursday. I was surprised how good it was running. I ran .25 miles (at 6.6 mph but it took 2:28 due to slow increase of the belt at the beginning) and stopped to tie my shoe tighter. I did some stretching at that point. Usually I run .5 and stretch but my shoe wasn't going to hold out. Then I ran 1 continuous mile (to make it a total of 1.25 running). Usually I really want to stop at less than 1.0 or I have to slow the speed. Here I did not slow the speed. I even increased it at one point. I wanted to increase for 30 seconds but only made it 20 seconds.  At 5:30 into it, I increased the speed to 12.0. That was the first time I've ever set a treadmill speed faster than 7.8.  I just wanted to see if I could handle it. I felt like I was flying. I knew it'd be difficult to hit the speed at the end to change it w/o falling off so I stopped early to try to do that. I ended up changing it to  .6 accidentally but then fixed it to 6.6 and all was good.  I was continuously running the entire time.   At .9 I set it to 6.0 for a slightly cooldown. The mile took me 9:12. Keep in mind that the treadmill slowly increases to my set speed at the beginning so that adds time and then I had about 5 seconds of belt decline and increase after my 12.0 run. Not bad.   So total for 1.25 miles was 11:40.

After the gym I showered and put on real clothes. Well it turns out a shirt I haven't worn since last year is a shirt that I forgot I need to wear a cami under it.  I felt like a hussy.  I went shopping after. I did buy some stuff which I will post about separately.  Then since I took so long shopping, I was able to meet Dave for dinner.  I just was going to go to one more store. I was in Target and going to buy pantyhose. I had looked around at some jewelry and stuff too.  Then the storm rolls in and the power goes out.  It comes back on and some registers work. I was going to pay but  the power went out a few more times. By the time it came back, the lines were miles long. I just put back my pantyhose and left. The power was still going off and on too.  It was harder to see when I got further in the store. I made it out and we went to Olive Garden for dinner. I felt like I just ate but Dave was leaving work so we ate. I got cheese fondue like I seem to always get there.
But the end of all this my new orthotics were killing my feet. Wearing them for 9+ hours is not breaking them in 1 hour at a time. Oops.
at 7:45 PM