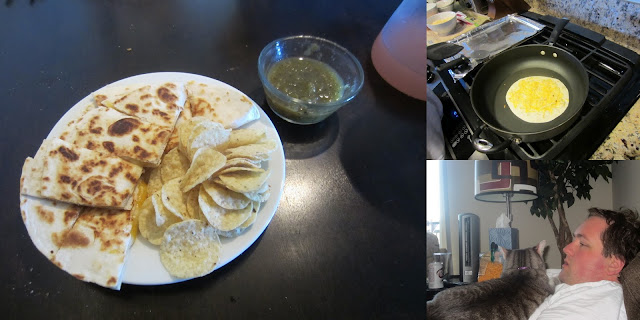 Dave and I cooked 2 out of 2 meals I ate. Pretty good. Dave had a 3rd meal of cereal but I slept in too late to end up eating breakfast.

We finally went to Goodwill and made what I think is our last of the Goodwill donations.  There are still a few boxes left so there might end up being more.   We went to the recycling place.  I hate that. So you pay an extra 5 cents per can and 10 cents or something per bottle when you buy drinks then you go and recycle them after to get your money.  Except it isn't like NY at all. There seem to be few places that do it. You go there and ask what you do and nobody answers you.  You watch some people and figure some stuff up but still aren't sure.  You wait what seems like forever even though only a couple people are there.  They weigh everything so then you end up with some money that isn't divisible by any can/bottle amount. Then you think that 40 minutes of your life was not worth the 3.81 that you just got.   It almost makes me not want to recycle. It was super annoying.  Now I know why people end up with garbage bags full.  It's because you try to go as long as you can before turning them in.   I still have to recycle other things.  I hear apartment complexes have to provide recycling. I haven't figured out how or where to do it. I also haven't asked. 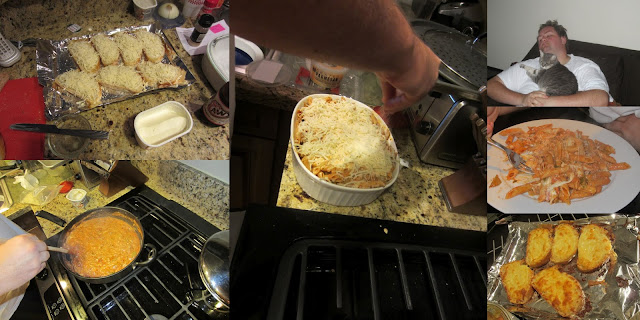 We finally took our color printer to the storage room.  It's been sitting in the way the entire time we've been here.  We don't have room to hook it up but I want to keep it.  It is also really heavy.  It is now in our basement storage area. We are the slowest people at progressing with moving than anyone I know.

After that we bought gas and the gas station didn't accept credit cards. It was so weird.

We went to Whole Foods and Safeway to get ingredients to cook dinner.   We made Baked Penne.

Now I felt the directions were pretty vague for making this on the website. I added some notes in parenthesis.
Brown meat with vegetables in large nonstick skillet. Stir in spaghetti sauce, 3/4 cup cooking creme and 1/2 cup mozzarella; cook and stir 2 to 3 min. or until mozzarella is melted. (Cheese melted right away but we cooked the sauce a bit longer first) Add pasta; mix lightly. Spoon into 2-qt. casserole (we totally filled our 2.5 qt casserole dish); top with remaining cooking creme and mozzarella (we also put Romano and Parmesan on top). Cover. Bake 20 min. or until heated through, uncovering after 15 min.

Now we used way more pasta than it said and I still felt that it was too saucy. Next time we said we'd use more meat and more onions.  We'd put less cheese on top because we didn't care for it like that. We added TONS of spices to the veggies, meat, and sauce. So we did that at 3 separate times.  There was no mention of spices in the original recipe.   Make sure you salt the meat when cooking it.  Dave actually cooked the meat and veggies but I asked him what he did.

Put oil in the pan and get it hot. Put in onions, salt, and pepper.  Then put in peppers, salt, and pepper.  Put in meat, salt, pepper (more salt on the beef). Stir and break it up good.  Let it cook for awhile.  When it is about done add basil, garlic, and spices for about 30 seconds. Then put in the sauce. Stir. Then more Italian seasoning was added. Once it was boiling, turn it down and simmer for about 20 minutes.

The toasts were delicious.  I didn't want garlic on mine so they are just butter and cheese.  Dave's have butter, garlic, mozzarella, Romano, and Parmesan. 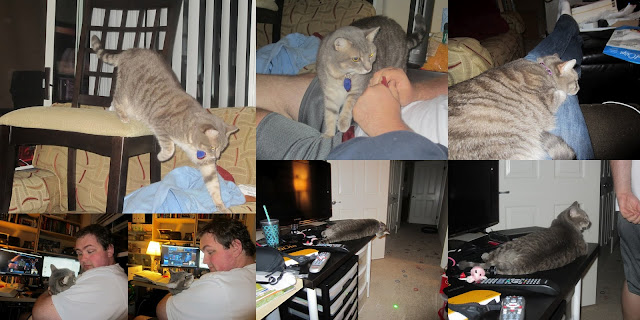 We watched TV after dinner and I still ate the rest of my cheesy toast. I sat on the couch eating it. I figured it wouldn't be good leftover.  I love to make garlic toast or toast from a fresh loaf of bread.  It is way better than the box of Texas Toast that you buy in the freezer section.    I love eating pasta and bread.  I would eat it everyday.  Some people cook pasta because it is easier but I cook it because I love it. Also making meat sauce or meatballs and fresh toast make pasta not as easy if you just open a jar and boil the pasta.

I did read some of my SQL book around bedtime and I ended up staying up extra late.  It was just too easy to keep learning.
at 1:30 AM