Working out - Some history 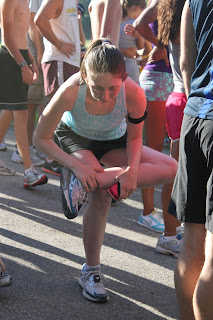 Two years ago and some change I joined the gym at work. I thought that I would go a few times a week for a month or two and then would lose motivation and would either quit the gym or at least discontinue going. I don't have a specific post about it, but back in April 2009, I talked about it a little. The first day I went to the gym was March 30. I got access to go earlier in the week but my first official membership was April 1 start.

There are probably many reasons I have stuck with exercising and maintaining a more healthy lifestyle but one of those reasons has been the trainers at the gym. 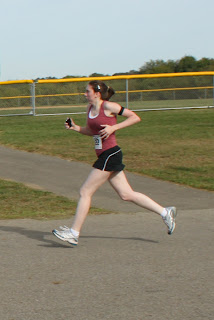 I didn't realize how much until recently.

Over the years I have gotten to know 4 trainers pretty well. I am pretty sad to say that only 1 of them is left. I am trying to get to know 2 newer ones but I don't deal well with change and just miss those that I used to talk to.

I have talked to a few of them about training plans and being able to handle them with my knee post-surgery.  I have talked to them about shin problems I have had, about what additional knee exercises I could do, what workout routines I could do, and many more things.  I feel like I more than just got advice from them that I became friends with them.  I feel like I have accomplished so much over the past two years and that I just have even more that I want to accomplish. Three years ago, I did not have any workout goals. I basically just wanted to be able to walk without pain. I am so glad to say that my goals are very different this time around. 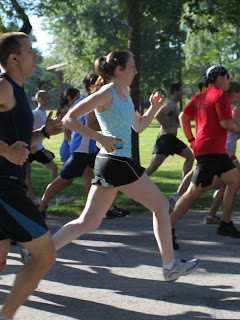 I have started to like yoga which I think is amazing. There is no way that I would be doing yoga if it weren't for the trainers.

Kelly has only been gone 1.5 months and I already lost a lot of motivating. Bri just left this week.  I really need to get more motivated on my own and less depressed that they left. I really miss talking to the trainers before or after a workout. I miss working out with them.

Kelly was great with motivating me to run my first 10k.  I had run a 5k and she said if I could run 3 miles, then I could run 6.  I would talk to her about my runs early on and ask her how she trained. It helped to be able to talk to someone who recently ran races and had to train. I also talked to her about her GoWear fit and then got one on my own.

Joining the gym at work has also provided a lot of friendships.  I realized recently that all of my "new" friends are people that workout. Also most of the conversations I have with people are about exercising.  Perhaps I have no other life, but I tend to believe that exercising is a good thing and working out with others is great. 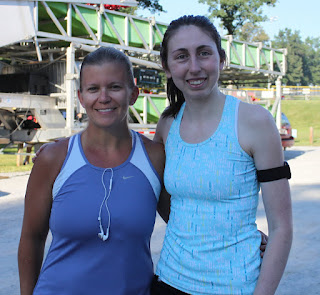 Lindsey encouraged me to attend group fitness classes. I used to talk to her constantly when I was working out after work.  It took a little convincing and then I went to Body Pump. After a few months I went to a spinning class.  Then I did Body Combat and Chiseled Core.  I tried Cardio Fusion and then eventually yoga. I was even doing classes 4 days a week unless I was training for a race  and cut it back to three days.

Every time I think about how the awesome trainers are gone, I get sad. I was motivated to workout on my own but now I'm demotivated based on how the old company was not chosen for the new contract at work even though they were the low bid. The new company is not nice and welcoming.  I'm basically afraid to talk to the trainers now, even the ones I know.  I felt like when I talked to the trainers, they actually cared about me. I'm not so sure that is the case with everyone. I really do hope to continue to maintain friendships with everyone. (I hope they don't think I'm that weird person that talks to them too much and that they actually want to maintain contact with me.)  They were amazing instructors. I always thought I could push myself on my own but they pushed me even more.

I was trying to get Dave to join the gym for awhile. He was willing to consider it once he was done with grad school. He was done in May but now I don't even feel like trying to get him to join. I also feel like quitting myself. I have some equipment at home but I feel like I won't use it at home because I like the other human interaction.

Sorry this post was longer than normal and jumped all over the place.   In summary:


I probably could have said more. I had more to say when I started this but lost my train of thought along the way.

How are you motivated?  Do you develop a friendship with trainers at the gym?
at 10:33 PM

Email ThisBlogThis!Share to TwitterShare to FacebookShare to Pinterest
Labels: exercise