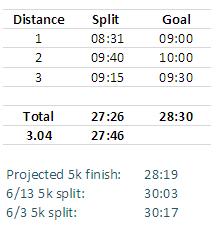 I wanted to run before work, but thought I wouldn't have time since I was going to Callie's after work.  But then I started to regret it so I decided to go out at lunch. It was warmer. It was sunnier. I still had a good run. I kept it short since I was doing it during lunch.
It was pretty hot even though the weather app on my phone only said it was in the 70s. I think the sun at noon makes it feel so much worse.
I set some goals as you can see by the goal column above. I'm not sure why I picked those times but I did. I know the 2nd mile is the worst due to the hill so I made a slower goal but probably too slow.  Then I had to push it to meet my mile 3 goal.   When you run, do you give yourself mini goals?

Now that I'm running more, I need to get my training plans going for my upcoming races. I'm proud of my much faster time during this run, especially since I felt like it was so hot with the sun pounding on me.  My 5k reach goal is 24:30 but my definite goal is 25:00. My best 5k time so far has been 25:59 and that was May 22, 2010. I really want to hit 25 but am already getting discouraged that it won't happen. If I had a friend to run with who was faster than me, then I'd improve my time. I just need to find someone who is willing to run with me. Sigh.  Any takers?

My knee did not hurt at all during this run. During my 6/3 run it did.  I iced my knee after the run since different doctors have told me how that is good.  I think I need to go to North Park and get a 5 mile run in. These 3ish mile runs are good but they leave me wanting more and wanting to increase my cardiovascular strength. 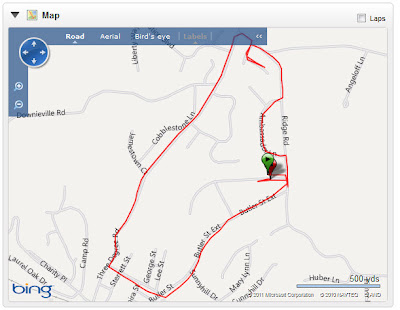 Note how I did some doubling back near the end to run at least 3 miles. But also the couldesac doesn't show that I ran to the end even though I did. 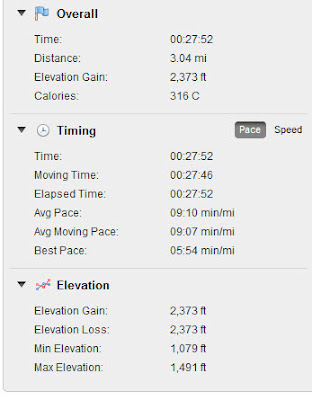 1:55 is my fastest split yet doing the loop around my house. I have had faster on a track or other flat courses.
During that stretch was the stretch that I saw the kids at the bus stop the last time I ran and the stretch where a kid yelled "Run. Run. Run." the time before and it was always my fastest stretch so this time I didn't want it to be slower than those times so I consciously tried to push myself. And look it paid off. 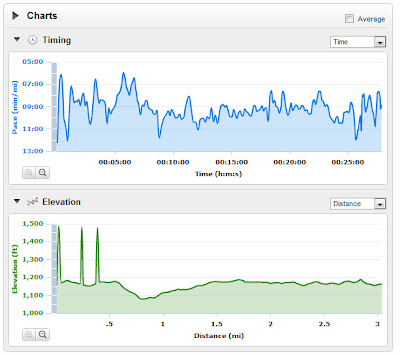 Those elevation jumps are wrong so it kind of messes up the look of the rest.
at 11:49 AM