Jen on Why I Run

Hi everyone!  My name is Jen and I have a blog at http://jenth.blogspot.com.  Colleen asked me about a month ago if I’d be interested in writing down why I run, to add as a post on her blog.  I wanted to wait to get some better race pictures, but now I have them so this is why I run. 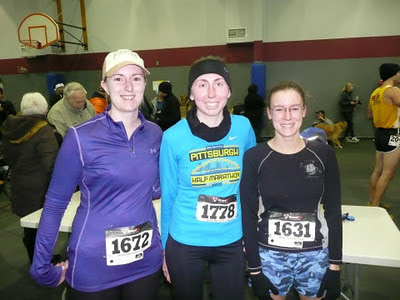 I have never been an athlete or into sports at all.  There are some good genes in my family but I didn’t get any of them.  (My sister did, however, and sports have always come naturally to her.  It makes me jealous sometimes.)

I actually joined the track team when I was about 5 years old.  I did it because my best friend at the time was on the team.  I had no idea what track or running really meant.  And as I was joining, she quit.  I didn’t want to be on the team anymore but my parents said you don’t quit things so I had to stick it out for the rest of the year.  I don’t remember much about that but I did get a ribbon for placing in a relay race.  And I remember watching the mile run and thinking that was so far!

I never was into running even after that.  I remember dreading the mile run each year in gym class, and I played tennis in high school and also hated any running associated with that.  We used to try to cheat and run less if our coach wasn’t watching.  My first year of tennis I was so sore for a little while as my body got used to the exercise, especially the running.  My hamstrings and calves were so tight!  But that also helped me learn sometimes you push through the soreness and it actually can feel better faster.

Before I go on, I should say that I don’t really consider myself a “real” runner.  I like to go out there and do it but I’m not even close to being competitive and I haven’t been at this for a full year yet.

I started out running as a way to get some exercise in.  I’ve tried other things before.  I did Body Pump (Les Mills) and loved that but it requires a gym membership and there aren’t any gyms close to me or convenient with my busy schedule to consistently attend the classes and make it worth spending the $.  I have EA Active on Wii but don’t really have enough room in our living room right now to spread out and do it.  I also have an exercise bike at home but I have to drag it out each time I use it.  With running, I just throw on some workout clothes and go.  No pulling out heavy equipment (the treadmill is already there) and if I want to run around the neighborhood I just walk out the door.

I started running late February of 2011.  I started solely on my brand new treadmill (birthday present from my husband) and did the Couch to 5K program.  I was about 8 weeks (out of 10) into the program when I ran my first 5k race.  It was downtown Pittsburgh, in April, and the weather wasn’t that great.  This was also my first time running outside, which might have been stupid.  It was cloudy and rainy, and it was cool enough that the rain was coming down pretty cold.  My husband drove me to the race and honestly if he hadn’t gone with me I would have chickened out.  I was so nervous, too!  I ended up walking twice towards the end but finishing with a time of 31:50 and from that point on I’ve been hooked.  I remember saying over and over to my husband- I just ran 3 miles!  I couldn’t believe it.  I was the person who couldn’t even manage a mile in gym class.

I’ve kept running since then and found more reasons that I do like to run.  I originally did it just to get some exercise in but it has been a lot more enjoyable than I ever realized it would be.  These are some of the reasons why:
I’m sure my list will grow as I keep up the running.  Some of my friends think I’m a little crazy and don’t understand why I run or how I could enjoy it.  I’m not sure if this will help explain it, but I’m surprised myself.  I’m currently training for my first half marathon, and I never would have believed I’d be at this point right now.

Email ThisBlogThis!Share to TwitterShare to FacebookShare to Pinterest
Labels: run, why I run