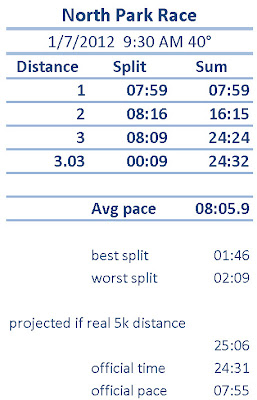 I ran the Resolution 5k again this year. I ran it this year with Jen and 2 years ago I ran it with Callie.  The weather was so much better this time around.

I ran in a tank, long sleeve shirt, pants, and compression socks.  It was too many layers. When I ran with Callie, it was so cold and windy. This time around, I owned more running gear to choose from to wear too.

We got there pretty early. I remembered issues with parking and didn't want to deal with that.

Before the race I decided to change my pace on the watch since it lets you have a pace. You have to click a button to view if you are ahead or behind your pace. I haven't figured out if there is a way to get it to yell at you if you are behind.   I changed it to 8:45 pace and told Jen I was making it extra fast.

I was ready when the race started this time, but I feel like there were so many more people at the start that it would be hard to not be ready.  There was no official start bar and it seemed like people just kind of lined up.  There were 184 finishers this year and 169 2 years ago and yet it seemed like there were way more people there this time around.  Maybe some people walked it and didn't get timed or something.

I didn't start up  near the front even though I like to. I think the lack of start bar just had me stand wherever.  I ran way around to the right to get in front of a bunch of people at the start.  My first .25 mi split was 1:46. I saw that and slowed down a bit. I can't keep that pace throughout and if I held it much longer I'd just die and go really slow at the end.  Maybe some day I can make that my goal! (yea right) 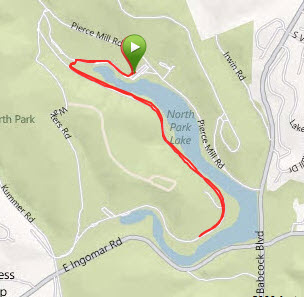 The foot bridge and little path that the course took was icy. I had to slow down to cross it. I was a bit concerned I'd fall.  There is about 20 feet (or more) of path that isn't the wood bridge and that was almost all ice.  At least that was the only portion we were warned about being icy.  Two years ago almost the entire course was.

After I finished my first mile in under 8 minutes, I thought that was similar to other 5ks that I've done in the past.  I thought to myself how I better not burn myself out.  I've done it before and never kept it up.

The fifth split (so mile 1 - 1.25) had a 2 minute split. I thought maybe I can keep this up. I need to keep pushing. I decided to start finding someone ahead of me to chase them down and try to catch up and pass them.

I got to the turn around spot at 12:23 and kept thinking back to if I've done half that before and then just ran a really slow 2nd half.  I knew I had to keep it up and think of it as a race and not a training run. I tend to just run at a race instead of really push myself to make it a race.

1.62 into it, I saw Jen heading to the turnaround. We cheered each other on.

I found a few more people to catch up to. They were only 10 - 20 feet ahead of me when I decided to chase them down.  It didn't take that long to catch up.  I also kept telling myself to keep it up that this isn't a training run. I also kept reminding myself that Callie said I can run faster. I tend to just get in the groove of moving my legs and not actually trying to run fast. I was trying to try. I had to keep reminding myself though.

A little over 2 miles in, I saw this lady in black tights with pink on them and pink sleeves. I decided I'd try to pass her. She was getting pretty far ahead.  She really gave me a run for my money. I had to keep at it.   I lost ground on her  at the foot bridge about 2.75 into it because the middle path was the least icy but there was a guy ahead of me that was forcing me to slow up.  A few steps after the foot bridge, I almost gave up catching her and visibly noticed I slowed up. Then I thought that was the wrong mentality and I can still TRY to catch her.

I ran and ran. Then with about .1 left I really pushed it. I didn't think I had any left for a kick but kicked it faster so apparently I did.  I passed her up with about 3 feet left before the finish line!  This was the first time I picked a person to chase down and had it take so long. I still have yet to not catch someone I go for. I think I know how to pick the slow ones. 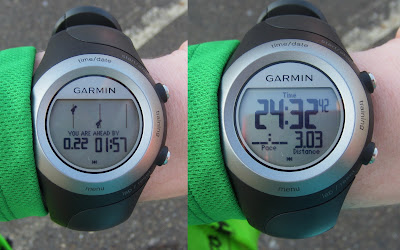 I looked at my clock the last 50 yards or so and looked at my watch afterwards and still didn't believe the time.  A new PERSONAL RECORD!  Not just by a few seconds either  My last PR was only 4 seconds better than the previous one. This one was by over a minute.  My old PR was 25:55. This race seemed short on my garmin but even if you extrapolate it, it would have been a PR by 49 seconds. Still very impressive to me. It is hard to improve a 5k time. 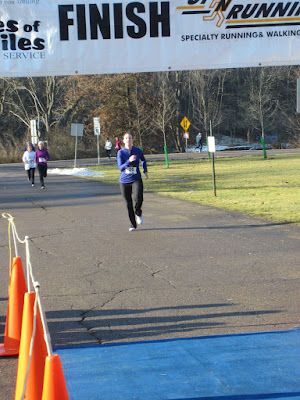 After I finished, I went to my bag and got my camera to wait for Jen to finish. I took some pictures of her coming in.  She got a pretty good time for her too. Good race all around. 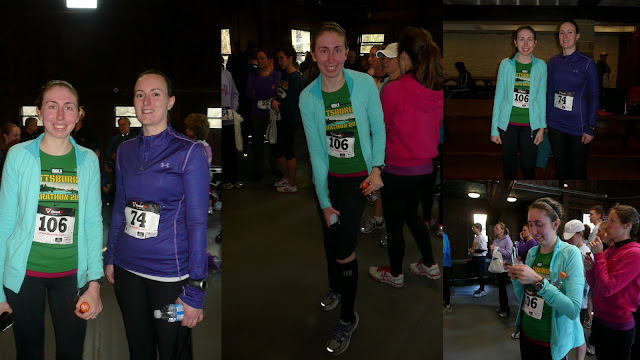 After we were both done, we went to the car to get our phones and Jen's camera. We hung out in the Rose Barn waiting for results. We had some snacks. We took some pictures. (The upper right picture is our photo before the race. All other pictures are after the race.)  I wore my compression stockings.  Jen took a picture of me texting Dave telling him that I checked the results and I came in 3rd place in my age group.   The results were taped to the window.  The official results are online now overall and by age group. 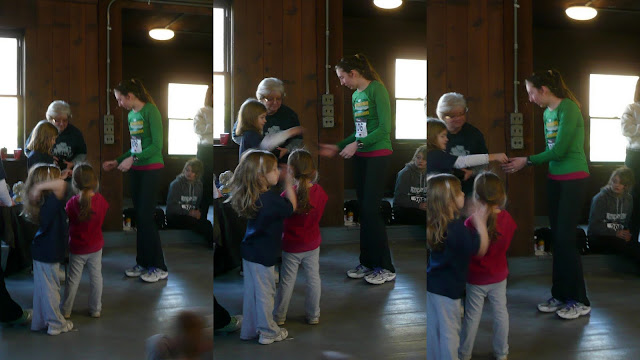 Jen got some pictures of me getting my award.  I was surprised they started with the females and went up in age group so the overall winners had to wait the longest.  It was obvious that after some winners got their awards they left (me included) so then less people are around to cheer for the overall winners.
Jen and I considered running more but I said I better get home to start preparing for my party. (Remind me not to run a race the day I'm having a party with 15 people.)

The garmin doesn't seem to have good speed or elevation when I start so one of the 2 is always messed up.  You can' really tell the differences in my speed throughout the race because of the 40 min mile at the start!  The other little spike is the halfway point and that makes sense.
at 6:15 PM