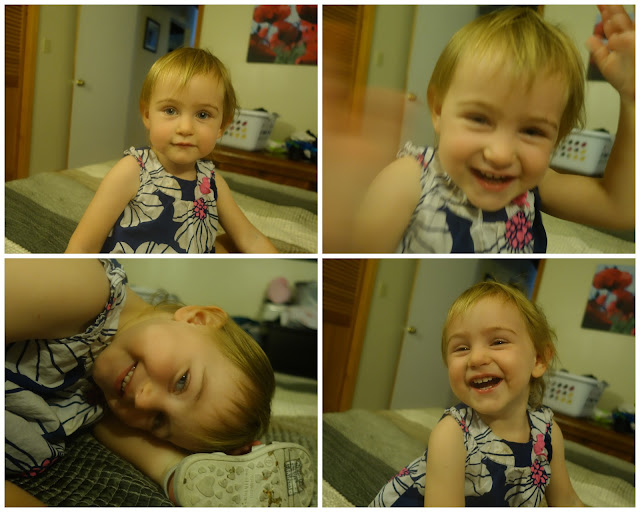 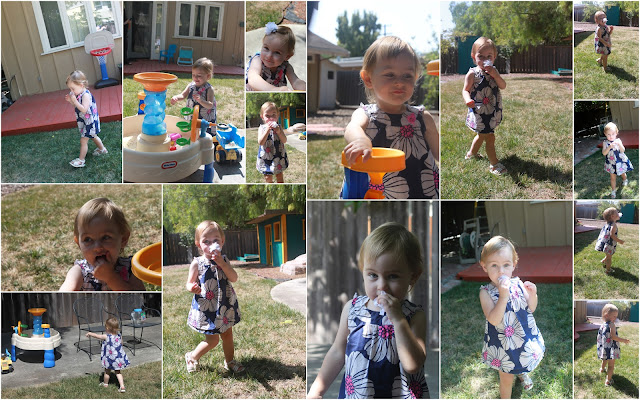 Sleep
She is staying up entirely too late. She seems to fall asleep almost right at 10 every night. She wakes up about 7 but sometimes a little later. She naps for about 2-3 hours almost everyday but she has about 1 day a week where she has a 10 minute nap in the car or stroller and then doesn't nap at all. Her naps have been starting later because she stalls with going to the potty. They start closer to 2.  She goes into her crib awake so she is always going into her crib versus her toddler bed. She won't stay in the bed if she goes in it awake.


Eating
On July 24, we had our last nursing session. It was a really bad couple days after that but then it was so much better.  When she nursed a few times a day she wanted to nurse way more. Now she barely even asks. For a couple weeks she asked a lot but now it's rare. She drinks milk from a sippy cup before nap and bed. She won't drink milk from a sippy in the morning but she will drink milk from her cereal bowl and then I refill and she drinks more.  She eats a decent amount of food but is often complaining and not wanting it.  Once we totally cut out nursing, she did better with drinking milk from her cup.


Sample Schedule:
She wakes up around 7. There was probably 1 day that it was earlier and a couple days where it was later. She has a 15 minute window that she wakes up during all the time. She goes to sleep between 9:30 PM and 10:30 but usually just within a couple minute of 10. Well we start bedtime routine around 8 daily. Sometimes earlier if she seems tired and a few times later if we ate late or she was busy playing. If she goes in early she still seems to stay up until 10.  She only naps 1 time so if that gets screwed up in a stroller and she naps 20 minutes that is her nap for the day.  She naps pretty close to 2.  For an hour before nap and an hour before bed she is stalling and claiming she has to go to the potty. It's taking up more of my day but she's crying less in the crib.

Ella eats breakfast as soon as she wakes up most days. She eats snacks during our daily runs.  Then she eats 2nd breakfast near 10.  She eats lunch at 11:30 or so.

She has some milk, uses the potty, then naps.
She eats briefly after nap sometimes and then eats when we eat dinner. Lately that is near 7:30 and it's entirely too late.  Sometimes she doesn't snack until an hour or 2 after nap. I call that first dinner.

Bedtime routine has changed slightly again.  Dave reads her a book and we all hang out together. Dave kisses her goodnight and she drinks some milk. Then Ella and I hang out and use the potty. I read to her in bed and on the potty. Sometimes she doesn't stay in bed at all so we skip that.  Sometimes we are hanging out a full hour.  I sing to her. She knows the singing means she's going into her crib. That's usually when she'd sign again.

She wears pullups at night and during naps just so she will sleep better. She wakes up from naps dry most of the time but I still put her in them at nap time. She was better months ago with waking up dry. 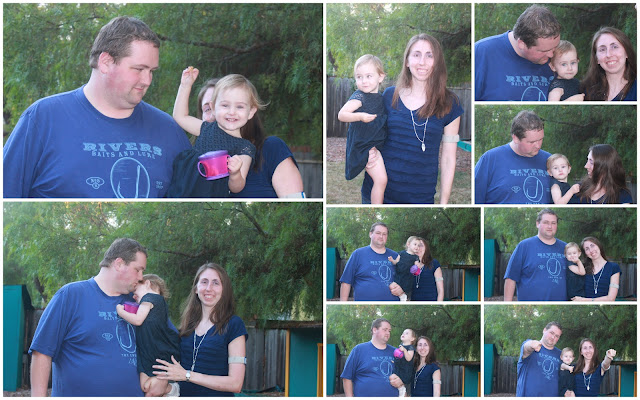 Special Moments:
On July 25. Ella peed in her potty after I left the room then drank it before I came back. Dave was in the room too and said he heard her slurping so he looked over. Her night gown was went when I returned. She got an immediate shower.
On July 27, she went down an enclosed slide for the first time.
On July 28, she played the memory game on her iPad and actually used her memory for where specific cards were to match them up. She did so well.
On July 29, she was at the pool and signed to use the potty. Then she actually went on the potty. I was so proud since we were at the pool!
On July 30, she said "ah pane" for air plane!
On August 2, Dave and I went on a Date and Gio watched Ella. Gio got her down for a nap easily!!!!
On August 6, teething started. She also finished her potty chart. She got to pick a "prize" and we said she could have anything she wanted and asked what she wanted. She left and came back with Dave's minion toy he got for his birthday. Well now it's hers. She got so happy!
On August 8, Dave watched Ella while I went to a Stella & Dot party. She fell asleep in her high chair while he was watching her. (Then a crib transfer failed and she was no nap Ella.)
On August 9, Ella used the big potty.  She put on her shirt and skirt herself. She jumped in her crib. This was the first time I noticed her jumping but not sure if she already did or not.
On August 10, Ella fell asleep for nap on me in the rocking chair. She has never done this when nursing was not involved.
On August 14, Ella went into the bathroom and pulled down her pants and went on the potty herself. I walked in to her sitting there done. 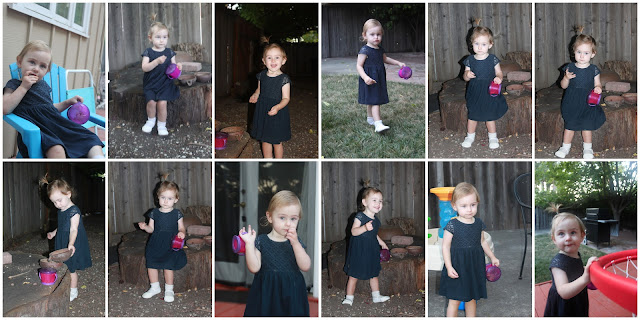 Development:
She put on shirts herself a few times. But this was with some explaining on how to do it.
She's talking more and is less shy about it.  She's actually talking a lot and it's great. She still has a lot of work to do.
She gets a sticker when she goes in the potty and this really helped with her having fewer accidents.
Overall potty training is a lot better BUT when she is playing with friends, she always has an accident. I try to get her to use the potty but she sits and runs off.  I've put her in pullups a few times around friends just so there wouldn't be an accident and I do this especially if we are at someone else's house.
Ella has started to say a lot more words and she uses them a lot.
She's so smart about learning things in the matter of seconds from us. 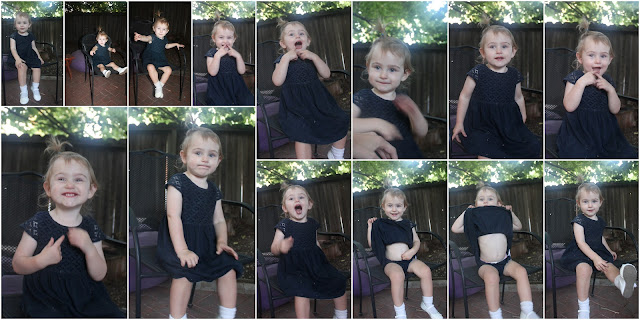