Since Liam was born before midnight we went home a day earlier than we would have if he was born just a few minutes later.
Liam's first night home was awful with sleep. He slept well during the day until 9 PM when I woke him to eat and then it was just misery. He wouldn't go back to lying down. I managed to put him down twice and he cried within minutes. I did not get into my bed until 5:30 AM and then Miles woke up at 6:30 AM so that was rough.  The next night he woke up mostly every 2 hours.  He will sleep for 3-4 hours straight during the day but not at night.
On his 4th night home, he slept for 4 straight hours all in the middle of the night so I got my longest sleep yet.
Latching to nurse is the hardest it's been for 3 kids. Sometimes it takes him a little while to get latched. I timed it 3 times and it took him 9 minutes to latch on my right side but he was getting and drinking milk that entire time. My shirt gets so much milk on it too. 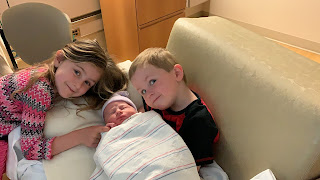 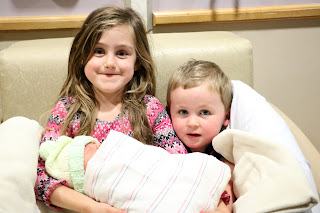 Liam has spit up after nursing a few times without a good enough burp. Or maybe it's without having a few good enough burps.  He's also a lot of trouble to burp. I will spend 10 minutes trying to get him to burp before putting him in his crib. 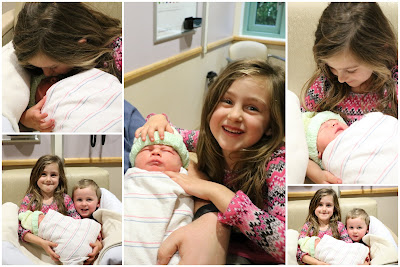 Mostly we try to keep him downstairs with us sleeping through all the noises. Then at night he's in his crib. It does make it that I have to also stay in the family room area so then sometimes I want to rest or nap so move him to his crib so that I can use the baby monitor.
Ella loves to hold him and will hold him for long periods of time. Miles likes to hold him but will just hold him for a few minutes here or there.  Miles asks why he's not walking yet.
On April 18, I noticed my ankles were swollen. Then as the day went on they got a lot worse. It was hard to squat down to clean up because my skin just felt like it was pulling so tight.  They were not quite as bad on the 19th until I spent a half hour cleaning up and then they were awfully painful again.  They were still swollen on the 20th. (In Miles's first week post, I mentioned I was swollen for 3 days.) (They were still swollen on the 21st too.)
On the 20th, I had a lot of cramping or pain. I lied in bed over an hour just trying to get the pain to go away. Ibuprofen helped a bit. When it wore off, I was in pain again. This happened for a few days.
I left the house to Liam's doctor appointment.  I went to Trader Joe's and preschool. I went to buy something from facebook marketplace and then to McD's.  So Liam went all those places too.

I tried to get First Day Photos at the hospital but they were not onsite either day which annoyed me greatly. I sort of tried to take a few pictures at home but lighting has been horrible so I haven't really.
I have the same problem I had the past 2 times; I have way too much milk. 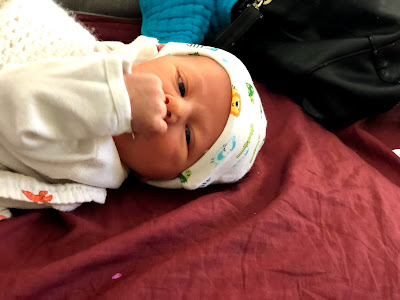 Liam already has has a holiday.  He's had his first Easter. I took a picture of him beside his basket but I didn't even take him out of his swaddle sack.
at 8:59 PM