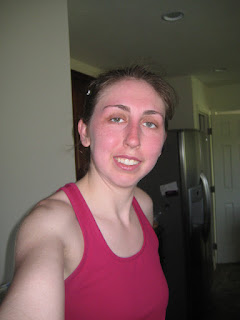 Saturday morning I had plans to run with Haley at North Park at 8am so I had to set my alarm bright and early.  Dave and I went to sleep around 9pm the night before but I still needed an alarm.

I woke up to an email from Haley wanting to run/walk the 5 mile loop.  I left to meet her and I thought I'd be late but I was early.
She was there a minute early too.
The plan was to walk 1/2, run 1, walk 1/2, run 1, walk 1/2, run 1, walk 1/2 for a total of 5 miles.  We both used the Nike+ distances and I knew it was off but we followed them anyway.  Her Nike+ said she went 5.7 miles even though it was 5.15.   Mine said we ran 3.7 and we ended up with an extra half to run at the end.  I wanted to use the posts to run but they are missing every now and then and conveniently missing at our first marker.

Haley had joked that once I was done with her I would run after because running with her wasn't a real workout.  I laughed but then it sort of came true.  Too bad I didn't have any water with me.  It got hot.  Haley and I talked for about a half hour so then my 2nd loop started around 10 and so by the time I was done it was pretty hot and sunny.

The run didn't seem like that much of a workout so I decided to run again. I hate now Nike+ makes it out like it was a workout.

I walked for .75 out of 5.5 for the 2nd loop but I missed timing the first .25 where I calibrated.  I forgot to note that when I was totally things.  The only time the Nike+ was calibrated right was during the .25 stretch that I actually calibrated it at. Going up hill it was way off.

After the run I really wanted water. I touched my face and it felt salty. Oops. That has never happened before.
at 8:25 PM