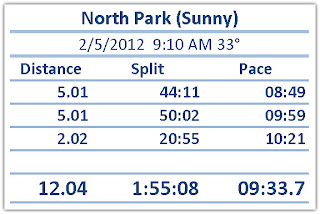 I went to North Park again today. Originally I was going to run 6 miles. Then I thought 9. Then I thought 10 because that's 2 loops.  I was meeting Jen at 10 and decided I'd run 1 loop prior to meeting her to run.

Before Jen and I started running, she told me she was thinking of running so I thought I can do that. Later she said she thought of doing 7. (She might have actually said 7 to begin with and I might have just misheard.)  I was indecisive if I'd do that too but then went for it.  That's how I got a total of 12 miles today. 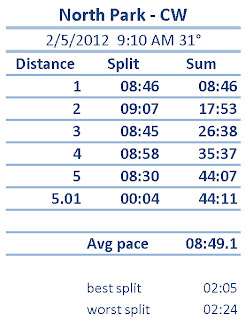 I ran my first 5 miles with a goal of 9 minute mile pace the entire way. I planned to run versus intervals this time around.

The weather was 31 degrees with a 30 degree wind chill.  I wore a tank + arm warmers, long sleeve shirt, and a very light jacket.  A little over a mile into it, I took off the jacket and tied it around my waist.  That was difficult to do while running. I had to remove my watch and put it back on. That was my slowest split.

A little over 2 miles into it, I ran into 2 people that I used to run with in the North Park Runners Group at 8am.  They were making their run a 10 mile run instead of 8.  We stopped and talked for a bit. You can tell when I stopped based on my BodyMedia fit data.  As I went along I played my game with bonus seconds.  Each split needed to be 2:15 and I'd add up my bonus seconds. Sometimes I'd subtract a few just because I know if my split says 2:12 to me it could have been 2:12.9 and I didn't want to get burned at the end with all those rounding errors.

My second mile was the slowest and I lost a lot of time taking of my coat and putting back on my watch. It carried over into a second .25.  I didn't get to pick up speed on the downhill.

The back half of the lake felt so hard today.  I don't like going counter clockwise, but knew I'd be running counterclockwise with Jen and I should switch up my distance.    I took off my neck warmer and wrapped it around my wrist at some point.  Later I even took off my headband and put that around my wrist.

I think today might be my 2nd fastest loop ever. My fastest being on September 20, 2011 with a time of 42:38.  That run was with Kelly and was really pushing me along. We also were only running 5 that day. Today I had to save my energy for a 2nd 5. 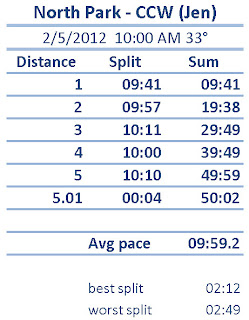 After my 1st loop, I had to get rid of more layers and drink some water.  I removed my arm warmers and long sleeve shirt and just went with my light coat. I liked the coat because it had pockets.   I also took off my gloves.  I put my headband and neck warmer in the car too.  The stop was a few minutes long because I was making sure to drink some of my vitamin water.

We ran the entire loop 4:1 intervals except at the beginning when the interval thing got messed up and we ran over 5 minutes.

Today was the first time Jen broke 50 minutes for the 5 mile loop.  We were close but still beat 50.

After the loop, we stopped quickly at our cars to get water.  I also ate 2 gummies.  (You are supposed to eat 5-10 each hour you run. Oops. I also didn't eat breakfast.) 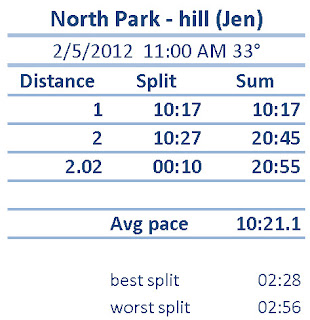 Then we decided to run 2 more miles starting by running the hill.  We ran out to 1.05 then turned around and headed back.   We didn't really follow intervals, but we did walk 3 times.  Our goal was to take it slow. We were trying for 11 minute miles but we failed at that.

You can tell with the BodyMedia fit data where I stopped to talk and that I did intervals with Jen.   Fit coach gives a warning that I'm on track.  I bet I won't be nearly as ahead on my calorie burn at the end of the day.  (I only ended up burning 2763 aka 713 more than my goal.)
at 2:37 PM