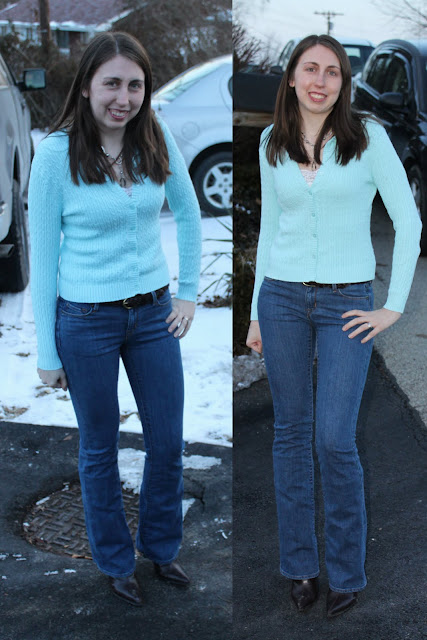 At first Dave was standing uphill from me and taking the pictures. I knew they would turn out crazy so then I swapped positions with him. Just look at the difference.  Most of the time  his eight difference is enough to ruin the pictures.  I quickly threw this on about 5 minutes before leaving the house to go to a birthday party. 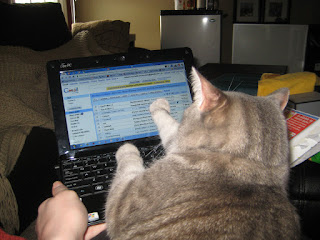 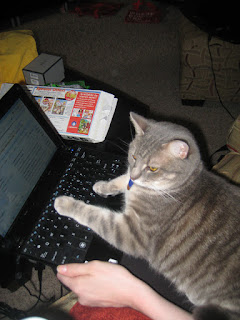 I had an extensive to do list. Of course I barely got to any of it. I also watched some TV. Poly was on my lap and super cute so I couldn't get up and be productive. She didn't want me to. 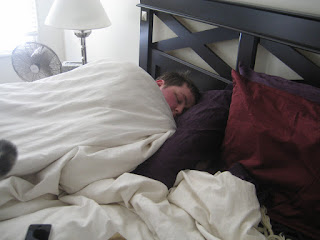 Dave took a nap and I took his picture. This reminds me of college. He never naps anymore so I never get any good pictures. 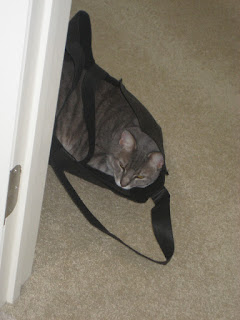 While Dave was napping, Poly thought she should rest in her bag. 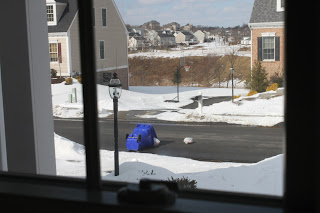 While doing laundry, I looked outside and saw our recycle bin in the street.  They never picked up recycling and ours is always so full.  I went out and picked it up. I left it outside because all the neighbors still had theirs up. 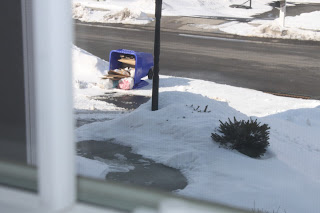 I folded some laundry and then looked outside again and it was blown over again.  This time I didn't go pick it up. 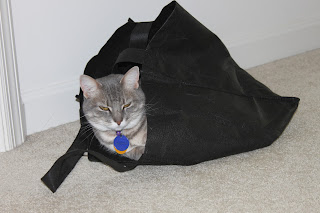 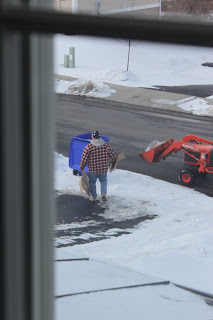 The next thing I know, the neighbor, Art, is picking up our recycle bin and putting the cardboard back in it that had blown out. 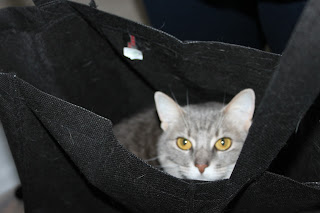 Then it was off to Jason's birthday party. I didn't think Dave would go because he never wants to go anywhere. Plus he has been busy and we only got the invite for this party 2 days earlier and I actually didn't even learn what place the party was at until that morning. Talk about last minute! And another thing, I only learned about the party 4th hand. I just want to say that I think that is rude. If I'm invited and you want a gift out of me, at least tell me yourself. Don't have your mother tell my father who tells my mother who tells me. Then have to have my family talk to your mother again because all the information wasn't even provided. The "kids" went to Chuck E Cheeses prior to this party. My mom heard people talking about that at the Super Bowl Party yet nobody told them then about a party after. Can you tell I'm a little angry here.  I remember when I was in 5th grade, they invited us to my cousin's birthday party on a Thursday and his party was on that Friday. And the party was 1 month before his birthday. Yes I remember this. I freak out when I don't give people two full weeks notice about something.  Also when I had a party, I called my cousin myself to invite him (and he told me he and his family would come and they did not.)  The time after that I had a party and I told my cousin about it in person. Then I tried to confirm with his wife via facebook and she ignored me... yet you could tell she was on because she had farmville updates or whatever those games are that people update about.  I couldn't find out if they were coming until the day before. (Having 11 or 14 matters to me with how much food I wanted to buy/needed to buy.)  OK I'm done with my rant. 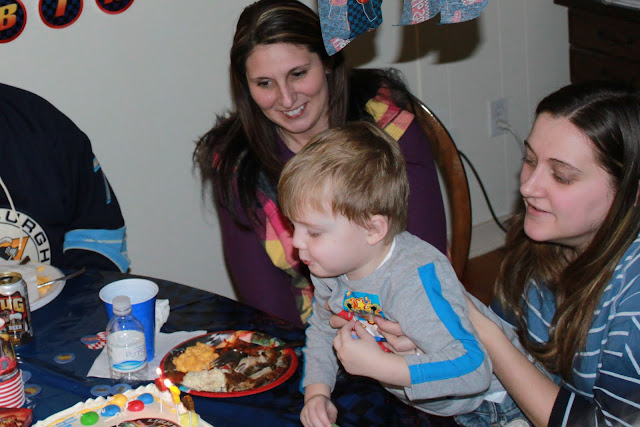 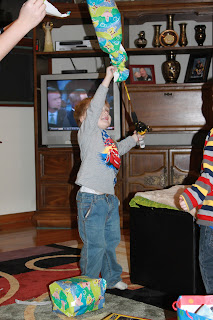 He got a fishing rod aka a weapon he was swinging around. 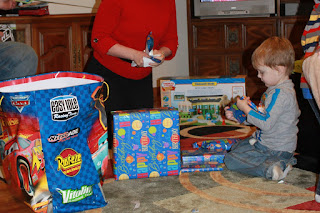 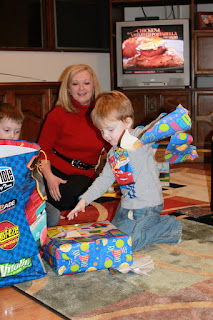 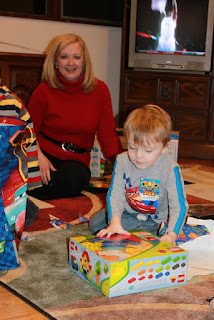 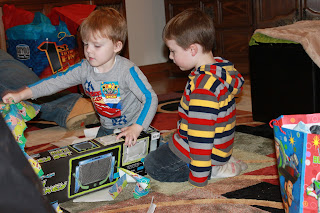 I don't know who that other kid is but he did run by me a lot hitting me in the arm with his little wrestler toy saying it was biting me. I barely saw Jason at all.  We left around 9:00 PM because we like to go to sleep and we had an hour+ drive home.  Well apparently even though the entire time Jason was there, he didn't care about me at all, that once I left, he kept asking for me.  Figures. 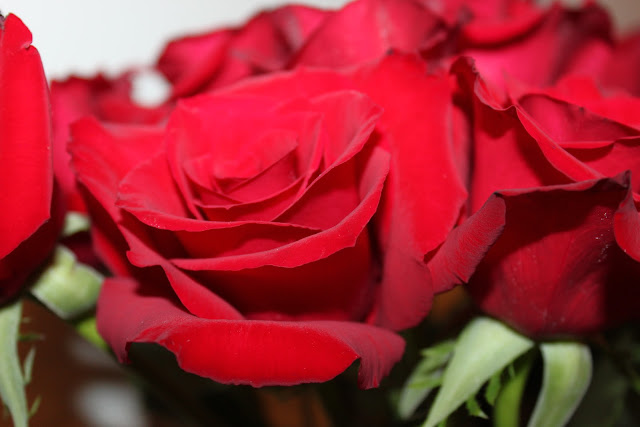 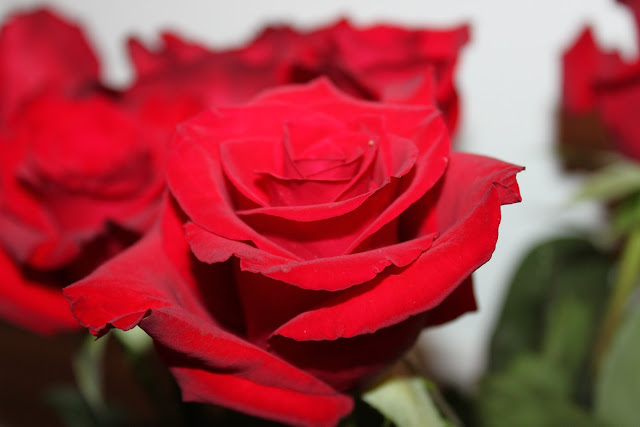 While I was occupying myself at the party, I saw some roses so I took some pictures.  I also took off the sticker that my aunt still had on their new TV. It was one of those stickers at the bottom that tells you some of the features.

After we got home, Dave and I started watching the Flex DVD they gave us. It was silly and described extremely basic things so then I fell asleep.