Old Clothes in my Closet - Take 1

I did not get very far because it was dinner time. 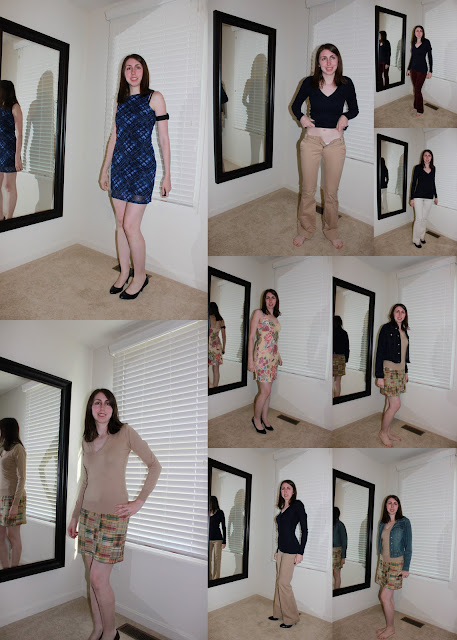 Blue dress = wore to the top 20 luncheon in 2002 and also one of the outfits for my senior picture. Both times I wore a silver cardigan that I still have.  I have not worn this since 2002.  I'm indecisive about keeping it. It fits great actually but it's short.

Tan sweater = purchased at Old Navy 2 years ago. I believe I wore it once.  I think the color is too close to my skin tone to look good. I look washed out or something. If I can figure out something to do to make this not suck then I'll keep it. Any suggestions?

Burgundy Corduroy pants and light khaki pants (upper right corner) are both too shot. I wore the khaki ones this year (and last year) and hated them because they were too shot. Both of these are in the goodwill pile. I'm not sure if I like the khaki enough to keep them and turn them into shorts or something now that I have a sewing machine on the way. February 26 of last year they did not fit.

Khaki pants that aren't buttoned.  Can't button them. Going to get rid of them.  In 2006, they became too tight for my thighs. The thighs seem to fit now. Actually I wore these pants about a year ago.

Light colored floral dress. I bought in Philly in early July 2003 and then I wore it to a July 4 picnic that Dave's grandmom was having. I have not worn it since.  --- Going to goodwill. I think the color is too light.

Dark Jean Jacket - I have not worn since high school. Not even sure if I really wore it then. It is really big and bulky in the shoulders. -- Going to goodwill.

Light jean jacket - I wore this in my senior picture and not sure how much else I wore it. I used to love it. I actually really like that the sleeves are long enough. Now a jacket would be more form fitting though. It is from Express.  I was indecisive about getting rid of these one even though I have not worn it in 8 years! I probably just need to be convinced to get rid of it or told to.

The khaki's in the bottom row I know I at least wore in 2008. They are a little higher waisted than I liked at the time but now there are a lot more higher waisted things coming into style and I'm being forced to buy them so maybe it's OK and I should keep them.

So what do you think of what I tried on today?  Should I get rid of what I haven't worn since high school?  See if I would have done that I would have gotten rid of my black dress and I wore that this summer before the 30 for 30 challenge.

Last February I tried on a lot of clothes and got rid of a lot. I kept a lot and some of what I kept, I haven't even worn.  There are more pictures of today's clothes on my picasa. Hopefully tomorrow I can go through 2 feet of my closet on the side that has clothes I don't even wear to work.
at 8:41 PM