I wear tons of red. I should probably wear my red skirt soon.

I had a 4:00 allergy and asthma doctor appointment. I took work to do while I was waiting. They didn't keep me waiting at all. I didn't have any opportunity to do it. The only time I waited was when the newer lady couldn't figure out how to get me into the system for the breathing test. I could barely handle the stupidity about that.  Since I was in Monroeville, I went to Johnny Carino's for dinner.  After my appointment, I called JD to invite him. He was able to make it.  I had 45 minutes to kill at the mall. That wasn't long enough. I failed at finding things. I didn't even use my $15 birthday coupon at Express.

On my way home, I went to Famous Footwear. I had a $15 off $75 coupon but I couldn't find enough of what I was looking for. I bought boots. I will post about those in a separate post.

Then all these shows are premiering this week so I watched some TV after.

I learned my asthma doctor is weird like me. This is why I love him.  He takes a picture of himself after he runs like I do. He then sends it to people. I do that too. He uses a Nike+. He runs. He runs races!  He one upped me by saying when he takes his picture, he puts his ipod in view so you can see his Nike+ data. I don't do that. I do take screen shots of iMapMyRun so that has the final time and distance. I include that data on my blog but not sure if I email that to people.   I told him how my face gets red when I run. He said that his one daughter's does too. I then get out my camera and scroll to find a pic of me after a run. I found one. It wasn't that bad either and he was shocked at how red.  People always do that. They know someone that's face gets red, they see my picture of my red face and they are shocked. I guess their friends don't ever turn nearly as red as mine.  Below is the picture I showed him. 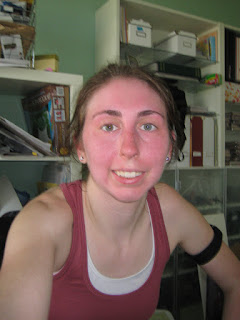